The Big Question Now is When?

Several years ago a non-governmental organization, the Global Footprint Network, came to my attention.  GFN's purpose was to monitor the state of the biomass around the world on global, regional and national levels.

GFN publishes an annual report marking what they call "World Overshoot Day." This is the date each year by which mankind is calculated to have consumed an entire year's worth of renewable resources. 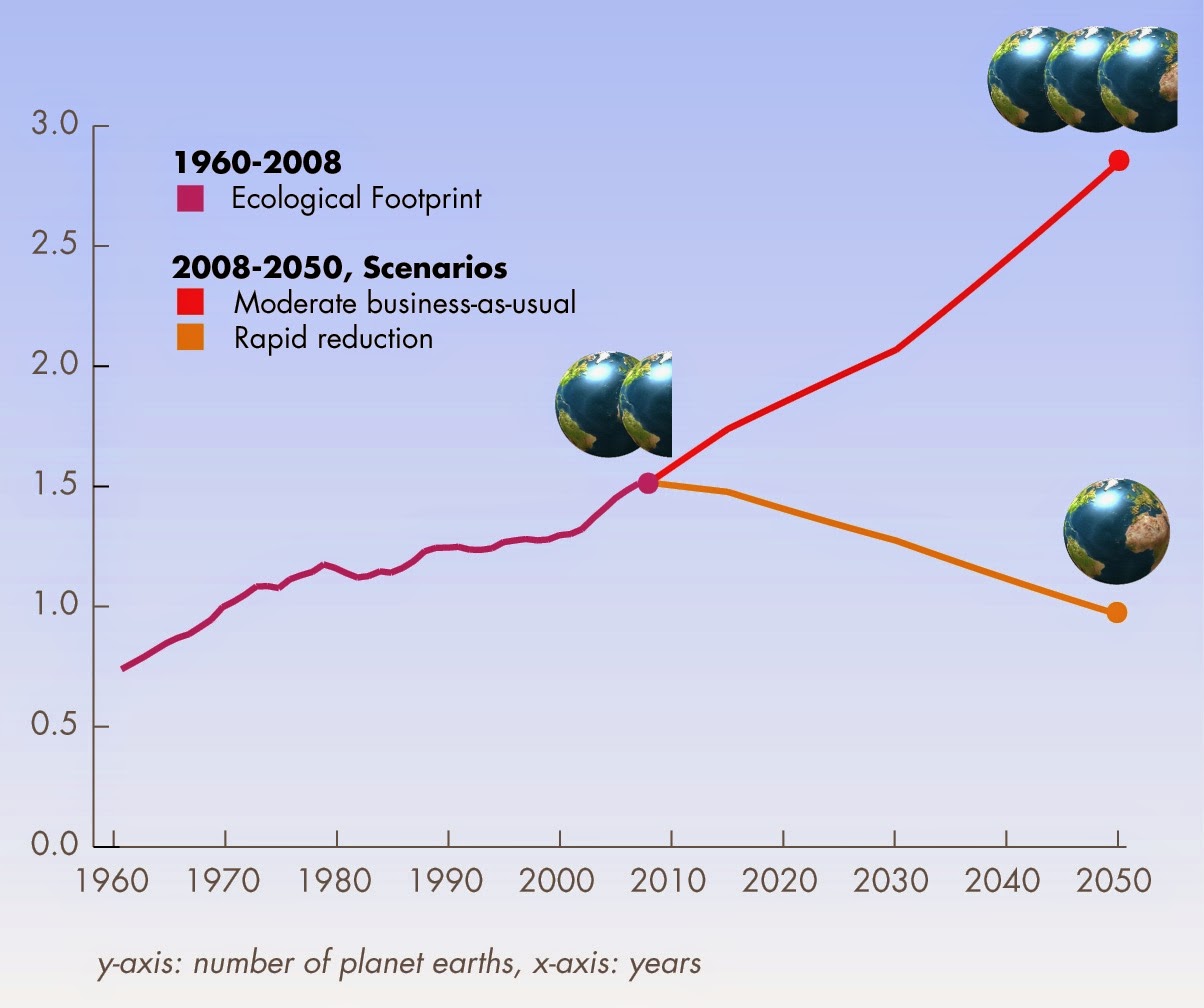 As the GFN graphic shows, mankind is now consuming renewable resources at roughly 1.5 times the natural replenishment rate.  Some like to say that we're using one and a half Earths resources.  If we keep on our current growth path, by 2050 we're on course to be consuming almost 3 times our planet's renewable resources.

It's almost too much to believe.  How can we, just one out of hundreds of thousands of species, be consuming far more than the total renewable resources of the planet?  Easy, we're diving into the planet's reserves, mining our children's future, eating our seed corn.

The proof is everywhere.  It's observable, it's tangible, it's precisely measurable. It's visible to the naked eye from space.  It comes in many forms.  One is desertification, the exhaustion of once viable farmland and its transformation into barren desert through a variety of bad agricultural practices and the accumulated effects of excessive amounts of chemical fertilizers, herbicides and pesticides. Another is the resumption of mass deforestation - cutting down forests faster than they can renew.  Again, visible to the naked eye from the International Space Station.

And then there's water, the key to all life on Earth.  ISS crew members can also see rivers that no longer flow to the sea and inland lakes, such as the Aral Sea, that are now drying out.  But the loss of surface water is just part of the story of our hydrological overshoot.  It also takes the form of blue-green algae contamination of our lakes, coastal dead zones and surface subsidence caused by draining our groundwater resources, our aquifers.  Subsidence is not apparent to the naked eye but it is measurable by various satellite systems that can determine not only how quickly the surface is sinking but, from that, the volume of groundwater being extracted.

Overshoot comprises not only resources that we consume, either directly or in the production of products, but also the resources we contaminate, pollute, with the waste from our activities.  We rarely, if ever, think of it but our ecosystem does a terrific job of cleaning up after us.  If it didn't you wouldn't be sitting there reading this.  It is an absolutely life-sustaining function.  The atmosphere absorbs greenhouse gases. Plants absorb carbon dioxide as do oceans.  Rivers cleanse contaminants as they flow to the sea. Microbes in the soil likewise eat waste. Let's not forget earthworms either.

Just as the planet is finite so too is the capacity of the planet's ecosystem to process our waste.  Exceed that limit and we wind up with accumulated waste - pollution.  An excess of agricultural runoff can lead to the destruction of aquatic habitats from blue-green algae blooms.  Freshwater resources can become unfit for human consumption.  The acidification of our oceans is another example. There are several others.

When I first became aware of the Global Footprint Network, World Overshoot Day fell in late October.  That meant we were in overshoot for just over two months per year.  With each passing year, overshoot came earlier and earlier. This year we hit overshoot on August 19th.  What that signifies is that, for about four and a half months out of twelve, we're dipping into our planet's reserves and generating more contamination than the ecosystem can cleanse. 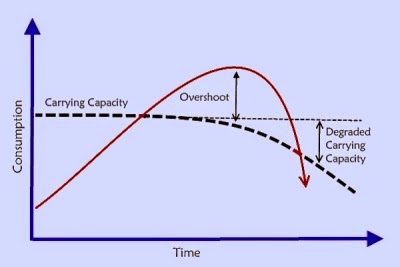 As the graphic above illustrates, as we enter overshoot, exceeding the planet's ecological limits, it results in a steadily degraded carrying capacity.  The Earth becomes steadily less able to meet our needs and clean our waste.  The red consumption line begins to plummet which leads us to yet another term, "collapse."  Our march toward collapse is measured in the steady progression of World Overshoot Day.

Most of what you've read so far I've written before.  I'm rehashing it now because of a recent report issued by the WWF, GFN and Zoological Society of London. The Living Planet Report, 2014, is an eye-opener.  You might prefer to begin with the ecological fact sheet.

LPR 2014 contains a wealth of information but the aspect everyone seized upon was the revelation that, over the past forty years, the Earth - our ecosystem or biosphere - has lost half of the planet's wild life.  Half, in just forty years, the blink of an eye in the history of mankind.

The critical point is not that we've lost half the planet's wild life so much as it is that we're now working our way through the remaining half.  Yet we maintain our slavish obsession with perpetual, exponential economic growth.  We keep questing for more and ever more - more resources, more production, more consumption, more waste.  At the same time mankind's overall numbers continue to burgeon even as our per capita consumption also rises.

Now go back to the first chart.  Find the 1.0 point on the left margin, the y-axis. Carry that across to the red line and then down.  You'll be at somewhere in the early 70s. Keep that in mind.

When I first found the Global Footprint Network several years ago I spent some time reviewing their considerable research and findings.  Back then I was a bit troubled to read that mankind actually reached the Earth's ecological carrying capacity around 1970 when our population stood at about 3.7-billion. Thereafter, as our population grew and our individual consumption also grew, we entered Overshoot or ecological deficit.

The dates line up.  Since we ventured into Overshoot, global wild life has declined by half.  Current species extinction rates are said to be a thousand times normal.  From 3.7-billion in 1970, we've almost doubled our numbers to 7+ billion already and we're said to be heading to 9-billion, perhaps as early as mid-century and upwards of 11-billion by 2100.

As part of a recent course in global food security I read a report by three Chinese experts dealing with what their country faced in the decades ahead.  For me, it wasn't their discussion of food that was telling so much as their projections of Chinese GDP.  They foresaw a China which, in 2000, had a per capita GDP of about $1,800 that would see that figure grow to $16,000 by 2030.  In fact the Chinese are just shy of $7,000 already but to more than double that yet again by 2030?

Where would China find the resources to ramp up its production so enormously in such a brief interval?  How would China cope with the contamination or its already distressed environment and degraded water resources?  Take that exponential growth in GDP and multiply it by the 1.5-billion population China is expected to reach by mid-century and then inject it into a world already deeply immersed in Overshoot and you have a formula for global economic and environmental disaster within just a couple of decades.

As demand for resources skyrockets while supply diminishes, we're bound to experience spikes in inequality both domestically and globally.  It's useful to recall the NASA report last March that found that sudden civilizational collapse was and will be triggered by the combination of two factors, over-consumption and inequality, both of which are with us today in spades.

Going back to the second chart, the Living Planet Report, 2014, reveals, simply from the fact of massive wild life loss alone, that we've already entered the point of significantly degraded ecological carrying capacity.  Spreading deforestation, desertification, the collapse of global fisheries, ocean acidification, etc. merely corroborate this.  Yet, as our biosphere's carrying capacity quite rapidly erodes, we're still increasing our production, consumption and waste, driving our global civilization ever faster toward chaos.

I think I've got a reasonable idea of how this ends.  The far more troubling question is when.

.. people need to become aware of how fracking - hydraulic fracturing, impacts so many aspects your article mentions. Certainly there are other resource stripping modes that punish ecosystems.. but fracking is taking hold, worldwide. (hardly news to you, MoS)

Its the integrated physical damage to water, forest, community that compounds as the process goes forward. Then we find that coercion, bribery, politics, finance, higher education, bureaucracy become tainted as well. From the small farm or home, the community, town, city, state or province.. right into the federal government levels.. the toxicity and greed spread.

And in turn, to mask their actions or the damage or their complicity, laws are passed, research faked and the falsehoods echo back down the chain.

Thus the pipedreams and ultimate poison of pennsylvania. BC and Christy Clark, the dollar ehtics of Joe Oliver, Stephen Harper gutting environmental laws with the omnibus bills of Jim Flaherty, the secrecy of Tony Clement and Nigel Wright.

Thanks for your incredibly informative article MoS. By following the diverse threads of illuminating information like that, perhaps we can slow the herd down and identify the vermin among us.. that just don't care.

If Richard Nixon could go down in disgrace, I have no doubt a creep like Harper can be humiliated as well. His policies and ideology are all about Overshoot.. and all the attendant issues come with him. Control, secrecy, fraud, incompetance, dogma, division.. and the vapid people who don't know any better

Sal, if nothing else, Harper may wind up in political lore and the history books as the "great corrupter." This whole business has become so bent since he took over.