This Should Give You Something to Chew On

Remember that global warming target of keeping temperature increases within 2 degrees Celsius by 2100?  2C, you may recall, is supposed to be the point within which we might - just might - avoid catastrophic, i.e. runaway, global warming.  2C, it's thought (perhaps wishfully) will give us a better than even chance of keeping this party going.

Did I mention Barrow, Alaska?  Barrow is here, in the red circle: 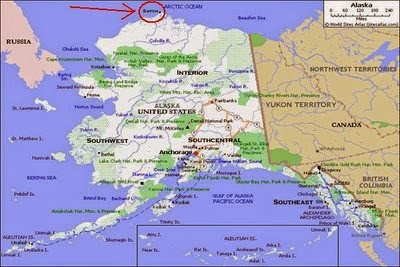 You probably noticed that Barrow is near the northernmost point in Alaska, well within the Arctic Circle. It's actually because of how far north Barrow is situated that it has already logged 7 degrees Celsius (not Fahrenheit, real degrees - Celsius) of warming.

In the last 34 years, the average October temperature in Barrow has risen by more than 7°C − an increase that, on its own, makes a mockery of international efforts to prevent global temperatures from rising more than 2°C above their pre-industrial levels.

A study by scientists at the University of Alaska Fairbanks analysed several decades of weather information. These show that temperature trends are closely linked to sea ice concentrations, which have been recorded since 1979, when accurate satellite measurements began.

The study, published in the Open Atmospheric Science Journal, traces what has happened to average annual and monthly temperatures in Barrow from 1979 to 2012.

In that period, the average annual temperature rose by 2.7C. But the November increase was far higher − more than six degrees. And October was the most striking of all, with the month’s average temperature 7.2C higher in 2012 than in 1979.

The sad thing is this is going to be music to the ears of the "Drill Baby, Drill" crowd.  Sarah Palin & Co., indeed our own Beelzebub, are going to see this as God's delivery to man of all that bountiful Arctic oil and gas wealth.  And what the Lord has given, they will not let languish untouched.

Unfortunately, one of the down sides of this kind of stat is that it can prevent people from doing anything. In Uganda during the 1990s education about how bad the AIDS situation was became so prevalent that it made the situation worse because people were so convinced that the situation was out of control that people thought they had either already contracted HIV or soon would regardless so they began to behave even more irresponsibly. The same thing can happen here regarding climate change. (In fact I suspect that most rightwingers have hoped for exactly this situation to occur) If temperature rise enough they can simply say that there is nothing we can do now so why try.

The Right is already falling back on that line, Kirby.

The fact is I also think it's too late. What keeps me going is the awareness that, while we are going to leave our grandkids with a crappy environment, there is still much we can do to make it even worse than necessary. We have no right to exploit their future for our immediate gain.