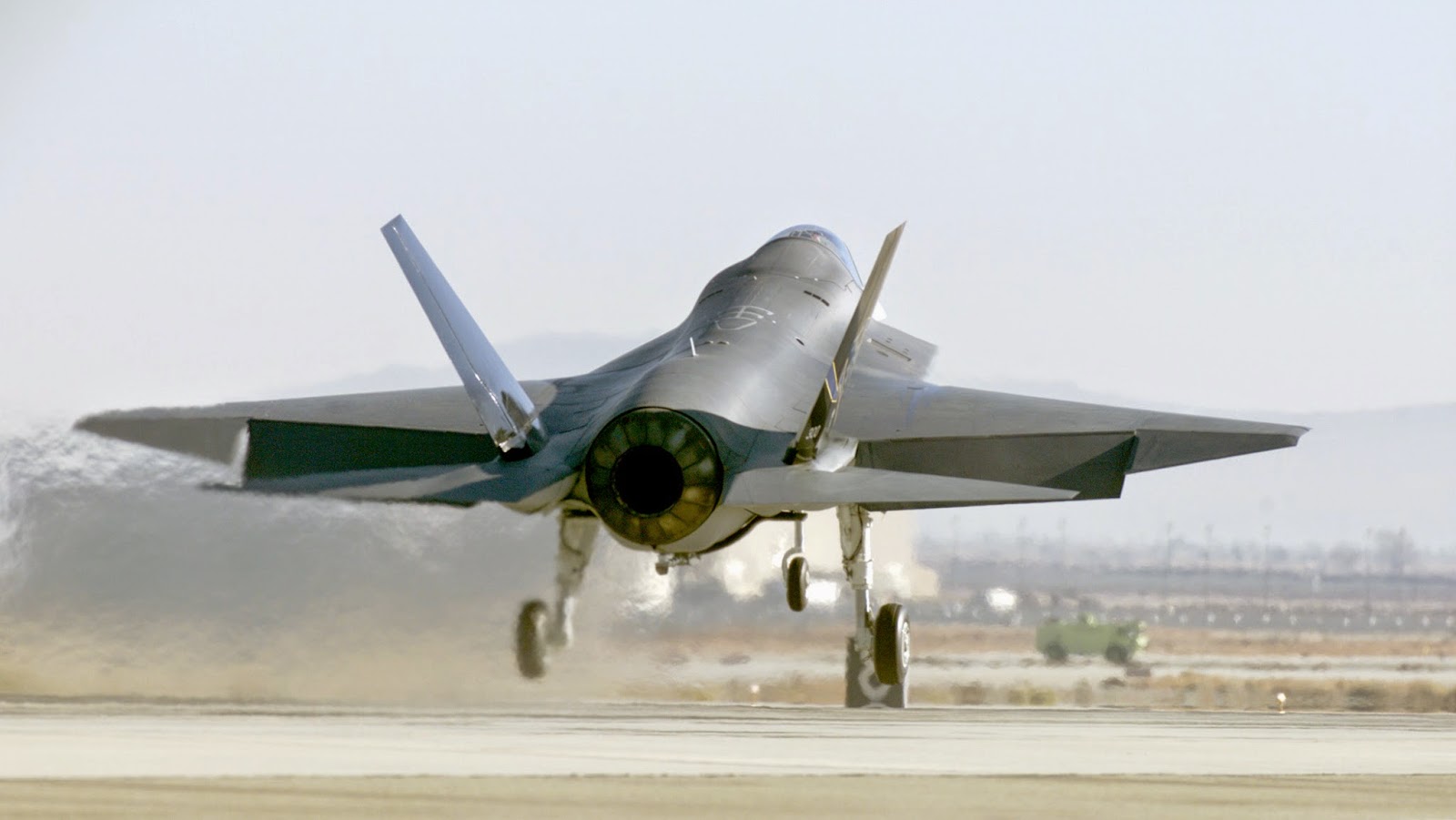 It's no secret where the F-35 is intended to operate - in the highly-defended airspace of just two countries, China and Russia.  The F-35 and its big brother the F-22 were designed to defeat sophisticated air defences, at least what would have passed for sophisticated at the turn of the century.

It's hard to fault the intended targets of America's stealth armada for responding to what, for them, is a potentially catastrophic threat.  And so they have.

They had a look, several looks, at what Lockheed and its sub-contractors were up to. It's believed they hacked a lot of computers, stole a lot of code and design secrets. Then the Americans made the incredibly stupid mistake of allowing a state-of-the-art stealth drone, the RQ-170, fall into Iranian hands almost intact.

The "bad guys" know more about America's stealth technology than America's allies do and probably ever will.  That's not a particularly good thing - for us, at least. They figured out a lot of the weaknesses and vulnerabilities in what are now America's "venerable" stealth warplanes. That has allowed them to develop some impressive air defence systems - multi- and broadband radars, long distance electro-optical sensors, multi-sensor anti-aircraft missiles.  They've also fielded their own stealth warplanes.

Here's the Russian entry, the Sukhoi PAK-FA.  This is designed to give the F-22 all it can handle.  It could also give the F-35 absolute fits.

Another feature of the Russian plane is that it appears to have a combination leading-edge extension/canard which probably remains fixed in stealth mode but comes into operation for close in air-to-air combat.

And, lest we be tempted to berate the Russians for stealing everything the Americans invented, it was a Russian mathematician who devised the calculations for stealth cloaking - all the ratios and angles, etc.  Some clever American engineers stumbled across the Russian paper, had it translated and turned it into this (which is Russian for "math"): 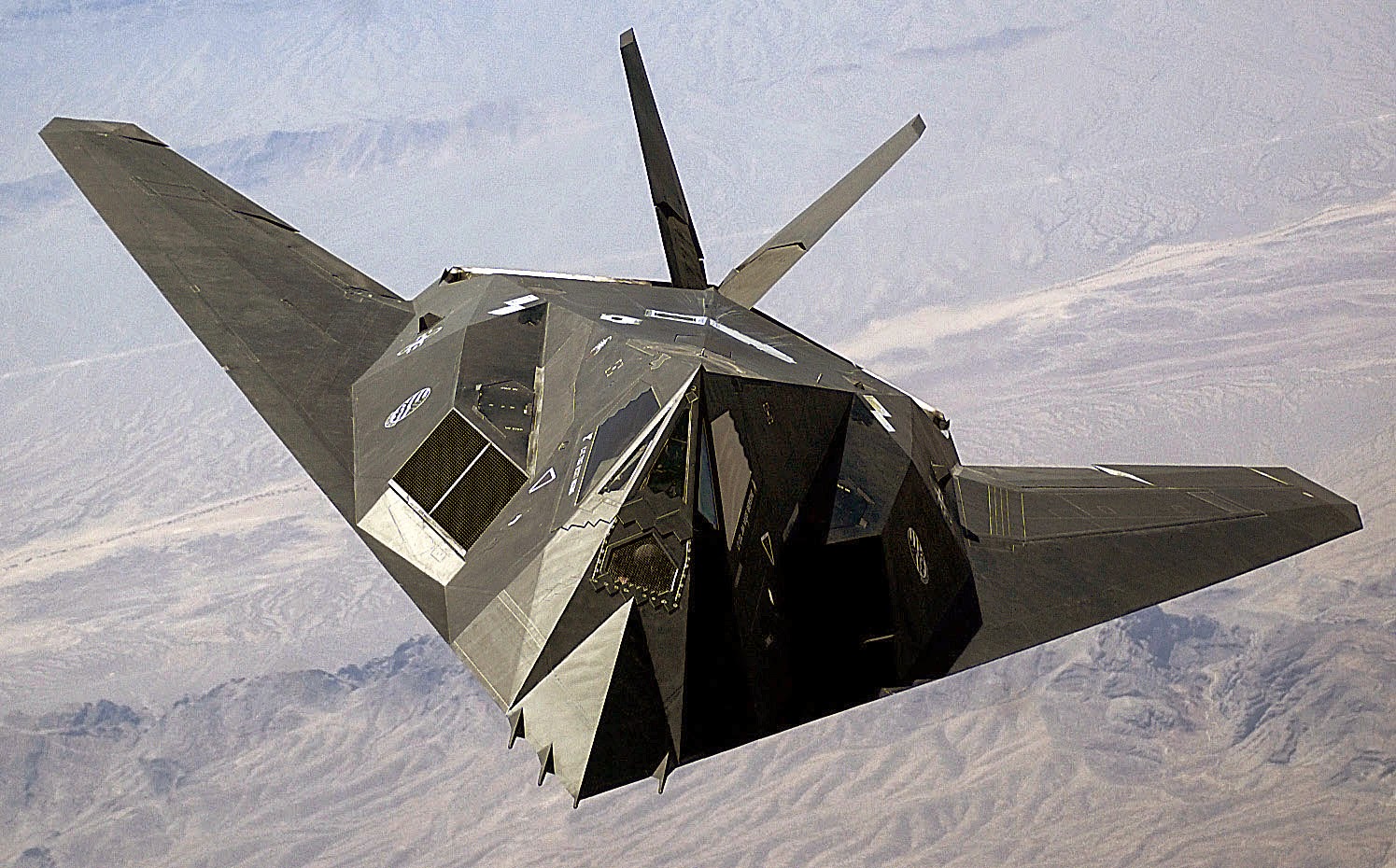 .. tech moves at the speed of money
& development .. and need .. (political culture)

Look for low orbit attack systems that will be locked onto military threats. Jet, mobile missile launcher, tank, children on beach, sub, cel phone, artillery, TV network, missile ship, teepee, troop movement, office building, endangered whale or frog. The data will flow & update during attack/descent & the weapon will follow the unique signature of the threat to the end.. or will miss

Systems like this will use a military 'app' and be able to take out a hound dog with a specific ear chip.. or a gun with its unique signature.. or delegate via an operator, federal spy or smart computer to a regionally launched school or flight of drones to take over & complete 'the mission'.. end of problem prairie hen !

Only a fool like Harper will go with old tech war, old Generals, royal nonsense, old sinking subs, deteriorated frigates. Its a 'drone world' and despite being a royal drone.. he fails to see that.. despite being sharp at hiring them as MP's, lawyers, PMO, spies & sundry 'electoral consultants'

Harper's not worried about defending Canada's coastlines..
He's selling and leasing the real estate to the lowest bidder. Hell he won't be around to defend or explain his Rapture theories, bizarre actions, environmental assaults.. Omnibus whack jogs or Proroges.. they never happened - baseless smears

Off to Geneva and London for our bewiggy sellout ekonomissed @ large & he can visit a few energy or mining Corps for Directors meets, lunch and laugh with Nigel, spew some more frothy pithy utterings to bewitched press, just like Lord Black ..

How did you like his validation and idiot grammar on Iraq lately? He didn't show up to defend it during 'Debate'..

'The evidence of the necessity of this is none better than the fact that the mission has been launched by President Obama' ?
Substitute President Bush for President Obama..
in that shallow statement.. and there we is at war..

For shame .. the Mission Creep can barely speak ..

Yeah, Sal, he is the ultimate Mission Creep. This 6-month nonsense is intended to soothe public anxieties, suggesting it's 26 weeks and we're gone. In reality it's just another exercise in Harper incrementalism. Get 6 months and then go for more. Air war only and then up the ante. He used this tactic successfully to play the Opposition for utter fools on Afghanistan. There's no reason for Harper to believe it won't work again.

I was going to say An F-35 Driver it is? However, everything that needs to be said has by you both.

The americans' military technology is increasingly a victim of the system it is supposed to prop up. That is, the American military is largely dedicated to defending that portion of the US system that is all about corruption. And one of the major points of the way the Americans do defense funding is to enable corrupt profits.

Unfortunately for them, over time the corruption has grown to be a bigger and bigger part of the whole package, to the point where it's become harder and harder for them to devote any of the massive resources involved to the project of actually making effective stuff for defeating enemies. This is inevitable given the basic nature of the beast. Their dilemma is that they would like the military to be more efficient, for the masses of money to procure stuff that will ensure their continued dominance--but they can't fix the situation without seriously cutting back the very system the whole edifice is there to advance. How can the forces of corruption defeat corruption for the purpose of enabling corruption?
On average it seems to me that the US military is doomed to continue spending more and more to get less and less until they get to some major systemic rupture.

That airplane is going to take the F-35's lunch money and send it home with a wedgie.

The F-35 has been a piece of shit airplane from the get-go. Kelly Johnson would never have allowed it to leave the back of a napkin. And the only thing worse than the F-35 was Boeing's F-32 entry in the JSF program competition which had to have parts of its airframe removed to get off the ground in the VTOL mode (so much for Boeing's mastery of aeronautical design).

So what we have is an underpowered, single engined, under-performing, lightly armed, non-agile, poorly designed (just one example among many: that stupid "Which dumbass thought this one up? Edsel?" cockpit canopy - poor rearward visibility and the damn thing hinges FORWARD, which is always worse than useless to have during an ejection sequence. Even our Russian friends abandoned that way back on the MiG-21 for Pete's sake) non-fighter fighter that's as ready to take on an adversary and "defend" Canada in the air-to-air mode as my four year old calico apartment cat is ready to take on a rabid badger. To summarize: little more than a bloated chunk of corporate welfare that's a "goose that laid the golden egg" bonanza for the shareholders of LockMart but not so much for the American taxpayer.

Of course for Generalissimo Shit Head sitting in the PMO in Ottawa with his delusions of tin pot dictatorhood programs like this are a handy dandy way of strangling funds out of those pesky things like healthcare, pensions, education, infrastructure, the public good...

Champagne for lobbyists and DND ticket punchers, cat food for the rest of us.

@ PLG - Yes, America's bloated defence budget is very heavily larded. It's bad enough that the Pentagon has to rejig its estimates of Chinese defence spending. Other countries simply get a lot more bang for their buck.

There are powerful voices within the US defence establishment already voicing concerns that America might get caught in a trap with the F-35. These types, including USAF Air Combat Command chief General Mike Hostage are already pushing for quick development of an F-35 successor.

The F-35 was and remains a political warplane. The "buy before you fly" aspect was purely political. The neo-con element of the Bush/Cheney admin thought America should field an invincible aerial armada and the F-35 was designed to overwhelm its likely adversaries - as they existed in 2000. The F-35 was not designed to meet the upgraded radars and multi-sensor technologies that have been developed to counter it. It was also not designed to survive combat with something like the Russian PAK-50.

BTW, the F-22's thrust vectoring was tested by European Eurofighter crews. They found that it gave the Americans a 20-30 second turning advantage before it so degraded the fighter's energy that it was easy meat for the conventional adversary. In other words from the break the F-22 had one chance to use its thrust vectoring but it had to get in firing position very quickly or it would pay the price.