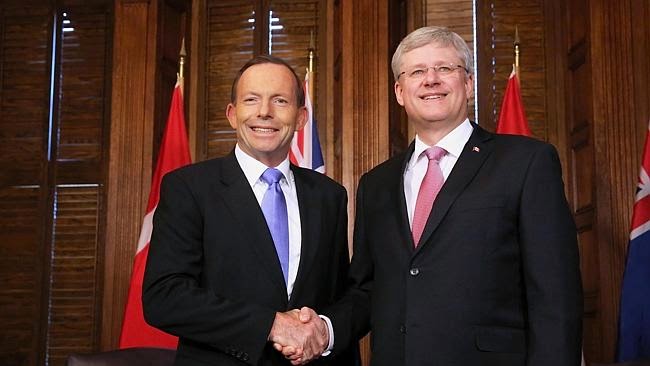 It's an American publication so you'll have to excuse the hyperbole.  The New Republic, in an article entitled, "These Two World Leaders are Laughing While the World Burns Up," obviously conflated Stephen Harper and his Australian ventriloquist's dummy, Tony Abbott, with "world leaders."

Canada once had a shot at being the world's leader on climate change.  Back in 2002, our northern neighbours had ratified the Kyoto Protocol, the world's first treaty that required nations to cut their emissions or face penalties.  In 2005, the country hosted an international climate change conference in Montreal, where then-Prime Minister Paul Martin singled out America for its indifference.  "To the reticent nations, including the United States, I say this: There is such a thing as a global conscience," Martin said.

...According to a 2014 Climate Change Performance Index from European groups Climate Action Network Europe and Germanwatch, Canada and Australia occupy the bottom two spots among all 34 countries in the Organization for Economic Co-operation and Development (OECD).  Among the 20 countries with the largest economies (G20), only Saudi Arabia ranked lower than them. Canada and Australia's records on climate change have gotten so bad, they've become the go-to examples for Republicans, like Senate Minority Leader Mitch McConnell, who don't think climate change exists.

...On the way to his first trip in the U.S., Australian Prime Minister Tony Abbott stopped for a full day of talks with Canada Prime Minister Stephen Harper in June. The Sydney Morning Herald reported that Abbott was in Canada's capital with the intention of building a "conservative alliance among 'like-minded' countries" to try to dismantle global efforts on climate change. At a press conference that day, Harper applauded Abbott's efforts to gut Australia's carbon tax. "You’ve used this international platform to encourage our counterparts in the major economies and beyond to boost economic growth, to lower taxes when possible and to eliminate harmful ones, most notably the job-killing carbon tax," Harper said. He added that "we shouldn't clobber the economy" by pursuing an emissions trading scheme or a carbon tax.

This is how Canada and Australia's top leaders frame global warming. The two stress that they will always choose short-term economic gain first, disregarding scientific findings and even the interests of their political allies in the process. The countries' abrupt shift on climate track conservatives' rise to a majority in Canada in 2011 and in Australia last year.

The hostility toward environmental interests goes even deeper than energy policy. Harper has battled his own scientists, independent journalists, and environmental groups at odds with his views.

Climate scientists have reported that they are unable to speak to press about their own findings, feeling effectively "muzzled" by agencies that want to script talking points for them. In June, a government spokesperson explained that federal meteorologists must speak only "to their area of expertise," which does not include climate change, according to a government spokesperson. Journalists sometimes face bullying, too. Environmental author Andrew Nikiforuk told ThinkProgress that "a government of thugs" slandered him and shut him out of events. But environmentalists may fare the worst. Seven environmental nonprofits in Canada have accused the Canada Revenue Agency of unfairly targeting them for audits. According to internal documents obtained by The Guardian, Canada's police and Security Intelligence Service identified nonviolent environmental protests—like people who oppose hydrofracking and the Keystone XL tar sands pipeline—as "forms of attack" fitting the "number of cases where we think people might be inclined to acts of terrorism."
...A decade ago, our close allies due north and across the Pacific rightly shamed us on our poor response to climate change. Now, they've lost the moral high ground. At the September United Nations Climate Summit, the largest gathering of world leaders yet on the issue, both Abbott and Harper were no-shows. The ministers sent in their place also arrived empty-handed; Australia's foreign minister suggested that only larger countries should be responsible for more ambitious climate action. Canada Environment Minister Leona Aglukkaq repeated an already-public commitment that Canada would copy Obama's fuel economy regulations requiring 35.5 miles per gallon. Afterward, in an interview with the Globe and Mail, Aglukkaq spoke of the unfairness of a global treaty. "It’s not up to one country to solve the global greenhouse-gas emissions. I mean, seriously now, it’s just not fair. We all have to do our part, big or small countries.”
That's true. If only her small country would do its part, too.
A government of thugs indeed.  A government that disgraces our people and our country both at home and on the world stage.