Steve, I Don't Know How to Tell You This. Bombing Isn't Working. 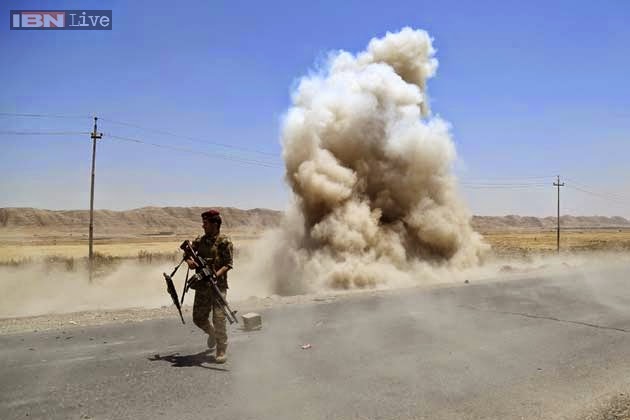 That didn't take long.  Iraqi Kurds report that ISIS has changed tactics to blunt the impact of allied air strikes.  Who, aside from just about anybody, could have foreseen that turn of events?

Air strikes against Isis targets in northern Syria have failed to stop the militants from advancing towards the centre of the city of Kobani, Kurds have said, in the latest indication that aerial power alone may not defeat the jihadists.

Fighting between the Islamist militants and Syrian Kurds continued unabated despite another volley of coalition air strikes in and around the Kobani enclave, Idris Nassan, Kobani’s “foreign affairs minister”, told the Guardian.

“Air strikes alone are really not enough to defeat Isis in Kobani,” he stressed. “They are besieging the city on three sides, and fighter jets simply cannot hit each and every Isis fighter on the ground.”

He said Isis had adapted their tactics to military strikes from the air. “Each time a jet approaches they leave their open positions, they scatter and hide. What we really need is ground support. We need heavy weapons and ammunition in order to fend them off and defeat them.”

Already the American hawks, such as the delightful Ms. Lindsay Graham, are calling for a Western ground war.

“The strategy of aerial bombardment is not going to work to destroy Isil [Isis],” the South Carolina senator Lindsey Graham told CNN. “At the end of the day, you cannot destroy Isil without a ground component.” He argued that training the inexperienced fighters of the Free Syrian Army in Saudi Arabia was “militarily unsound” and “will lead to their slaughter”.

His words were echoed in London by the former chief of the defence staff general Sir David Richards. “Air power alone will not win a campaign like this,” he told the Andrew Marr Show. “It isn’t actually a counter-terrorist operation. This is a conventional enemy in that it has armour, tanks, artillery, it is quite wealthy, it holds ground and it is going fight. So therefore you have to view it as a conventional military campaign.”

Trust George to beat us over the head with our own hypocrisy.  In his latest commentary, George shows how our casus belli, our justification for war against ISIS, would serve equally to justify flattening all or at least most of the Middle East to save the lives of its people.

The humanitarian arguments aired in parliament last week, if consistently applied, could be used to flatten the entire Middle East and west Asia. By this means you could end all human suffering, liberating the people of these regions from the vale of tears in which they live.

Perhaps this is the plan: Barack Obama has now bombed seven largely Muslim countries, in each case citing a moral imperative. The result, as you can see in Libya, Iraq, Pakistan, Afghanistan,Yemen, Somalia and Syria, has been the eradication of jihadi groups, of conflict, chaos, murder, oppression and torture. Evil has been driven from the face of the Earth by the destroying angels of the west.

Now we have a new target, and a new reason to dispense mercy from the sky, with similar prospects of success. Yes, the agenda and practices of Isis are disgusting. It murders and tortures, terrorises and threatens. As Obama says, it is a “network of death”. But it’s one of many networks of death. Worse still, a western crusade appears to be exactly what Isis wants.

Already Obama’s bombings have brought Isis and Jabhat al-Nusra, a rival militia affiliated to al-Qaida, together. More than 6,000 fighters have joined Isis since the bombardment began. They dangled the heads of their victims in front of the cameras as bait for war planes. And our governments were stupid enough to take it.

And if the bombing succeeds? If – and it’s a big if – it manages to tilt the balance against Isis, what then? Then we’ll start hearing once more about Shia death squads and the moral imperative to destroy them too – and any civilians who happen to get in the way. The targets change; the policy doesn’t. Never mind the question, the answer is bombs. In the name of peace and the preservation of life, our governments wage perpetual war.
Sigh.

Assad has been fighting this problem for years (even if the group(s) he fought against didn't call themselves ISIS at the time). And he was not averse (as the west is) to being utterly ruthless, from the air and the ground. And Assad killing large numbers of people aligned with ISIS, which is an ethical step farther than the west will ever go, hasn't destroyed the group. It's merely contained it.

ISIS is patient. If they stop attacking, and give up their captured heavy weapons they will not have been defeated. After a few years, some disenchanted Sunnis will do again what they have been doing in Iraq: subvert an Iraq army outpost, recapture some weapons and go on from there.

Iraq needs a plan to contain ISIS, not destroy it. A plan that seeks its destruction will not ever work.

The western rhetoric around this group is insanely over the top. It's unnecessary for Iraq's (let alone Canada's) security that they be wiped out.

Chris, how do we deal with ISIS if we don't deal with the forces that create, arm, fund and empower it?

The main force that empowers it is militant Sunnism. Which isn't going away. But, as you've written about recently in a previous post, I guess you mean how to deal with countries like Saudi Arabia and Qatar that fund the militants? I don't know. I don't think there is a good answer. This will never fully stop: this truth must be accepted. The West does itself no favours in lying to itself about the possibility of ISIS's "destruction", and then trying to foist this ridiculous notion upon the Iraqi government.

So what should we (Canada, the West) do? In the medium term, we should let countries like Iraq, Iran and Turkey take the lead to try and sort it, and to talk it out amongst themselves. Carefully consider backing up those countries with western resources if they earnestly think it will help. But if you give them resources, don't wash your hands and walk away, like Obama tried to do in Iraq.

In the short term, if we want to do something military to help, we would need to clearly define an objective, which ought to include containment (define key cities or areas which you'll defend: and put less to no emphasis on defending other areas: allow ISIS to control them.). Destroying any heavy equipment ISIS controls could be step one of that goal, which is what air power is good for, I suppose: and that is what we are doing. Beyond that, I don't think there is a good military strategy (as Assad has shown).

But the containment strategy I've just mentioned is also very difficult to achieve, since the Iraqi army hasn't done this in the past, and likely can't do it now or in the near future. And what is the point of Western powers doing it for Iraq, when Iraq (for good reasons) finds it difficult to do themselves? Why make that long term commitment? ISIS isn't truly a threat to the Western world, no matter how many people they behead.

Canada should be concentrating our limited resources on our own hemisphere. Investing and shoring up our own societies and teetering countries like Honduras, Venezuela Argentina and Mexico, so they don't succumb to homegrown militant ideologies, amongst other ills.

I agree with everything you've proposed, Chris. Focusing on the Americas would be an admirable alternative to our hapless tinkering in the Middle East and South Asia.