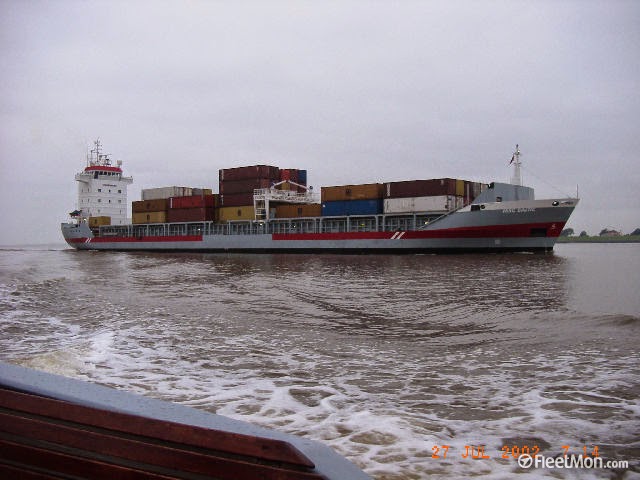 A Russian container ship, said to be laden with oil, is adrift in gale force winds approximately 15 kms. off  Haida Gwaii in the vicinity of where Harper wants to ply the waters with supertankers full of bitumen.

A Coast Guard ship is enroute and expected to arrive by 9 p.m. by which time the Russian ship's fate could well be sealed. The vessel is expected to be on the rocks at around that time.  A tug has also been dispatched but most ocean-going tugs of large capacity have to come from Washington state.  In stormy conditions the trip can take two to three days.

The vessel Simushir is reported to be laden with 500 tonnes of bunker oil and 60 tonnes of diesel.

The gale force winds gusting out of the south seem to have abated (here on Vancouver Island at least) but winds up in Haida Gwaii are expected to shift to westerlies that will push the ship directly toward Moresby Island.  The Russians are trying to get the Simushir's engine working again which appears to be their best hope of keeping the vessel off the rocky shore.

Let's hope the seamen can be rescued.. the ship kept of the rocks. Thanks for breaking the news.. Will look for info or reports in mainstream media of Coast Guard response or sitrep

Are there any marine assets that can respond? Ocean tugs, a frigate that can get a tow line to them? Are they in reach of USA ships for support?

I was unaware of west coast weather warnings
so caught unawares by your post ..
my surfing & kayak connections
also caught by surprise..

Seas are running at what height ?

Hi, Sal. Just wondering if you're from out this way.

We've been buffeted by southerly gale winds all day but that has finally died down. The latest report for Haida Gwaii is for the winds to shift, becoming westerly. That will push the ship directly at the islands.

The Russians are trying to get the ship's engine running again. That seems to be the best chance of avoiding a grounding.

The Coast Guard coastal patrol vessel en route is plainly too small to take the Simushir under tow even if it somehow does make it from Victoria in time. The ocean going tugs I'm aware of are based in Anacortes, Washington but in anything less than calm waters, they're a 2-3 day sail from Moresby Island.

I am following the Haida Gwai adrift story
from the flatlands near Toronto, MoS

I am also following the Prud'homme event
re 7 huge underground natural gas caverns
flaring off in Saskatchewan, wellhead blown off
as well as the related evaporation of coherency
or responsibility/accountability in Ottawa

Thoughts right now are with the merchant mariners and any rescuers attempting to aid those in peril.. Will follow this event carefully ..