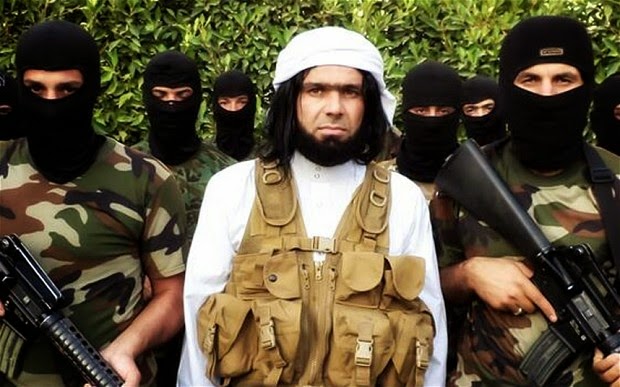 What exactly is ISIS?  It calls itself the Islamic State but to recognize ISIS as a state is to give the extremists a status they haven't sought and don't deserve.

Sure they talk about establishing an Islamic Caliphate but, for now, their main function is to take and defend territory in Syria and Iraq.  Their successes have mirrored our failures.

Where exactly did these people come from?  At times it seems like they emerged from the sands of the Arab desert but let's get real. Their successes have shown a bit of sophistication and training. Those are the sorts of things that leave traces.  Western intelligence knows who stands behind ISIS, who is funding them and keeping them going.  They're not talking. There's a reason for that, several in fact.

Somebody had to front a lot of money, effort and organization to get something like ISIS up and running.  From their weapons to their lovely black outfits and matching ski masks to their carefully scripted publicity machine, this is not a bunch of rookies.

My guess is that ISIS derives from the extremist army raised to fight in Syria by Saudi prince Bandar bin Sultan.  You might remember him as a favourite playmate of George w. Bush. 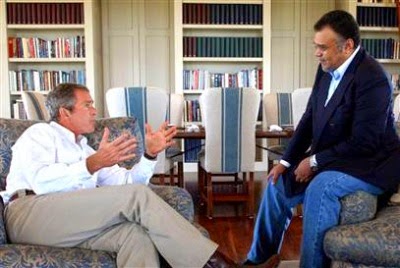 Prince Bandar, a.k.a. "Bandar Bush",  was the chief of Saudi intelligence until he was unceremoniously fired in April of this year.

Bandar bin Sultan is one of the main mindsets and players of regional insecurity especially in Syria, Iraq and Lebanon.  His support for terrorist groups acting in Syria is not hidden to anybody.  The Saudi prince has very close relations with the armed terrorists in Syria. Recently he had lashed out at the Al-Saud family over its way of backing terrorists.  These criticisms have annoyed Saudi monarch Abdullah.

In July, The Independent published a look at Bandar through the eyes of ex-MI6 chief,  Sir Richard Dearlove.

Some time before 9/11, Prince Bandar bin Sultan, once the powerful Saudi ambassador in Washington and head of Saudi intelligence until a few months ago, had a revealing and ominous conversation with the head of the British Secret Intelligence Service, MI6, Sir Richard Dearlove. Prince Bandar told him: "The time is not far off in the Middle East, Richard, when it will be literally 'God help the Shia'. More than a billion Sunnis have simply had enough of them."

...Speaking at the Royal United Services Institute last week, Dearlove, who headed MI6 from 1999 to 2004, emphasised the significance of Prince Bandar's words, saying that they constituted "a chilling comment that I remember very well indeed".

A cardinal rule of warfare is to know your enemy. That's something we're struggling to avoid when it comes to ISIS.  We don't want to see the extremists for what they truly are - Saudi Arabia's anti-Shia Foreign Legion.  Once you connect the hound to the hunter a much different picture emerges.  If you don't take out the hunter you'll always have to worry about when he's going to release the next hound.

Of course, where the Conservative government is concerned, Saudi Arabia is strictly off limits.  With the ink still not dry on a 15-billion dollar arms deal, we're not likely to offend the Saudis even if their fingerprints are all over ISIS.

An excellent post Mound. It seems the Saudis are 'off limits' for almost anything going on in that part of the world. Were the 9/11 hijackers not Saudis?
Unfortunately for mankind the pursuit of power and profits will, once again, take preference over the humane treatment of our fellow man.

Canadians need to wake up and turn off the Harper Government legacy lullabies.. How Canada's Government began aiding and supporting terrorism in Syria needs to become common knowledge.. and how that connects to our dealings wiith like minded Saudis, even moreso.

How's this for a wakeup about Harper headline?

Here's the link to the article.. footnoted as well
and defining in detail the six integrated strategies and comprehensive actions developed by the Prime Minister, his cabinet etc.. paid for with tax dollars. Was this backfire blowback strategy an Election Promise? I should say not. Ca we still follow the money through Tony Clement et al.. I should say so.. !

Do we think many Canadians would support Harper joining a new attack on Iraq, knowing how he helped fund & foment genocidal disaster? Not when they realize what a circle game, war game, arms industry sellout conspiracy it really is. Guess that's why Harper hates diplomats as ambassadors in places like Jordan. Better to have a trenchant supporter from his security detail

Thanks for the link, Sal. I think it's generally accurate and certainly fleshes out my limited grasp of the facts. I knew when Bandar threw his fit and spoke of raising an army to be recruited, equipped and trained in the hinterlands of Jordan, that something very bad was likely to happen.

The Saudis are Dr. Frankenstein. They created this monster, with help from several others, and now they regret it. What they regret is that their monster got out of their direct control.

The Saudis and their cousins in Qatar and Kuwait are schemers. It's a game the sheikhs and crown princes played in Afghanistan during and after the Soviet days; to some degree on 9/11; in pre- and post-invasion Iraq; in the ongoing effort to destabilize Iran and Shia Islam; and now in Syria and ISIS.

It's why I've been arguing all along that, cleaning up this mess, should fall to Saudi, Kuwaiti and Egyptian ground forces. If they can't cooperate with the Shia government in Baghdad on this, then we have a good idea of what's coming afterward if we ever manage to eradicate ISIS.

BTW - we're never going to get rid of ISIS. As a non-state actor, ISIS has the advantage of being able to morph into whatever form suits it at any given time. They can operate as a conventional, military unit when that suits them or they can transition into an insurgency or they can simply dissolve into gangs or individuals to be reconstituted elsewhere in some other form under a new organization.

That's why when you're dealing with something like this, you have to cut off the head.

.. the facts of Harper meddling in Syria and of course Afghanistan are limited and distorted.. obstructed or buried via Prorogue, 'Cabinet Confidence' or National Security per Harper and Clement et al.

Welcome to the new era where in the fulsomeness of time (Peter Kent).. the obvious costs of reckless Harper adventurism will be revealed (Tony Clement) .. say 20 or 30 years from now. And government will 'go over the head of Parliament, the Governor General and the Electorate' (John Baird)

This seems an entirely new pile of Harper doodoo surfacing, much like the Afghanistan torture pile of bullshite.. Nothing 'noble' or heroic here.. Zero Canadian Values evident.. just Harper et al trying to game and get away with complete nonsense in foreign lands.. Wannabe rapture crusaders looking for a Caliph ?