Disaster Averted? Simushir Under Tow. Long Night of Westerlies Ahead. 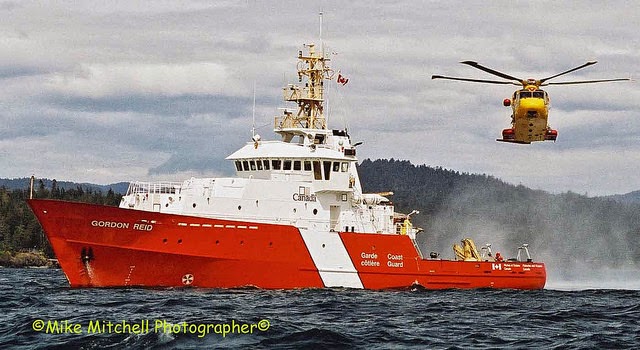 The Canadian Coast Guard coastal patrol vessel, Gordon Reid, has the crippled Russian cargo ship, Simushir, under tow and is slowly taking the ship away from Moresby Island in Haida Gwaii.

The Haida, however, remain decidedly unimpressed.


CHN President [kil tlaast’gaa] Peter Lantin said Friday afternoon that the possibility of an impact with land is their worst fear coming true. Lantin said the amount of time the response was taking casts doubt on the Northern Gateway pipeline project's promises of world-class oil tanker safety.
"There's nothing world class about it. The fact that 20 hours is the earliest estimated time of arrival for anybody just reinforces what we have been saying all along," Lantin said in a Skype interview from Haida Gwaii.
"The systems in place are not adequate, and it's a joke. It's a joke to think they could ramp up the amount of tankers through our territory and convince us that there's world class systems in place to respond. We're scared. We're scared about what this could mean. It's the worst scenario possible."

Something all you drylanders should consider.  We dodged a real bullet today. The gale force winds that swept along the coast were southerly - out of the south. That had the effect of blowing the Russian ship somewhat parallel to the shoreline.

More likely, at this time of year, would have been a westerly or north-westerly storm that, quite probably, could have seen the Simushir wrecked hours before assistance arrived.

We dodged a bullet today, probably, but it will quickly be extruded into disinformation as supposed proof that the north coast is safe for supertankers.

This does not demonstrate that the "world class" oil spill response programme will be able to cope with a real northcoast marine disaster.  The amount of time it did take - in relatively stable afternoon weather - demonstrates one thing: in heavy seas there would never be any real hope of dealing with a floundering, heavily-laden supertanker.

Even tugs based in nearby Prince Rupert won't be able to reach the site until at least this (Saturday) morning.  In the Hecate Strait, with a heavily-laden supertanker adrift, the arrival of the most diabolical storm imaginable (and I have seen, pretty close up, three or four really decent tornadoes, once having to outrun one of the damned things on my motorcycle), would utterly overwhelm the ship and its berthing tugs.

These are storms that most people would find demonic. Seriously, I mean that, I've been in one.  You never want to endure another day like that yet it never, ever lets you go and remains vividly in your mind for so long as you draw breath.
It's the purest expression of raw terror, the gripping fear that remains after the shock and adrenalin are long gone.

.. southerly gale ? When did that last occur ?
'Dodged a Bullet' is being polite.. & you're right

A Nor'wester and that Russian ship is being battered on the rocks of an unforgiving lee shore.. and no hope of a towline

Let's see if the towline holds as winds shift to westerly & the swells shift. I'd assume they're trying to tow south or into the wind somewhat.

.. the towline has broken it seems, but a lot of distance gained as the seas are only running 4 metres or so with several daylight hours left 6:30 PM EDT. More ships enroute inc serious tugs, so hopefully they can get this ship wrangled to safety and not have to pull the crew off by chopper. No word if the weather is worsening or easing