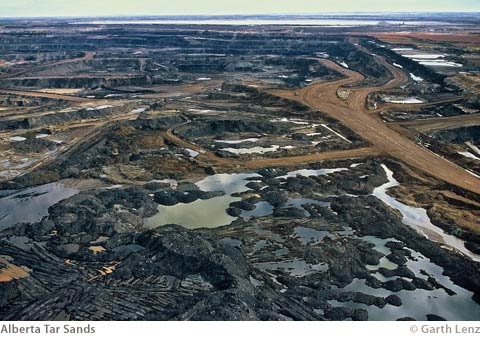 Born into an oil company family, Stephen Harper's rise to petro-politics has been uninterrupted from his days in the Calgary mailroom of Imperial Oil all the way to his arrival at Sussex Drive.

Harper doesn't like to talk about climate change and he's even less disposed to doing anything about it.  That's hardly surprising given that he's Canada's top fossil fueler.

We know that Harper is a bitumen booster but how many of us realize that he's deeply, ideologically predisposed against renewable energy?  It's something Naomi Klein explores in her new book, "This Changes Everything."

Klein contends that clean, renewable energy and the private sector simply don't mix.  The focus of fossil fuels is profit, first and foremost.  The focus of renewables is clean energy.  Renewable energy can be competitive with fossil energy for the consumer but it's more of a break-even proposition for the producer.  Break-even is not the desired outcome for the private sector but it's just fine for the public sector.

And so the world will be held hostage to the fossil fuel fetish of people like Stephen Harper and his Aussie boy toy, Tony Abbott.  Unfortunately both sides of the aisle in the House of Commons are awash in fossil fuelers.  Still it's a good and ample reason to finally purge neoliberalism from the ranks of the Liberals and New Democrats.

The neocons think that nothing is worthwhile unless a small groups is making money and a large groups is loosing money.

Well, Rumley, they do embrace a truly radical ideology. It creates the sort of agenda that appeals to the belief-driven who will readily displace fact to make room for myth.

In BC, publicly-owned BC Hydro electric utility has been hijacked by the private hydro power industry, thanks to the BC government.

Now BC Hydro owes about $50 billion for power from privately-owned renewable hydro and wind projects.

It's doubtful whether BC Hydro even needs that power. BC Hydro appears to be losing a lot of money from this scam.