About That Extinction Business. 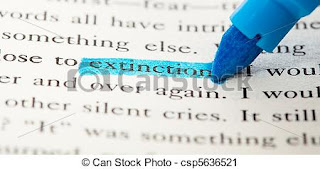 Like so much of climate science, recent reports that the Earth is already in the throes of a sixth mass extinction event have quickly shifted from science into public relations only this time it's the scientific community behind it not some conglomerate of petro-giants.

The point is well made in this report from Deutsche Welle.  It seems to come down to, for God's sake don't use the "E" word.

Published in Proceedings of the National Academy of Sciences (PNAS), it was headlined with the words "biological annihilation" - a startling term for a scientific paper. The authors said this wording was necessary to convey the magnitude of the crisis our planet is facing.

The PNAS study is just the latest in a series of studies to warn of a sixth mass extinction event. Unlike its predecessors, it looked not just at the rate at which species are being wiped out, but also the dramatic decline in the range and populations of species that are still with us.

It came to the sobering conclusion that 50 percent of individual animals "that once shared Earth with us are already gone."

Mark Williams, a professor of palaeobiology at Leicester University in the UK, told DW that although the study makes for depressing reading, he agreed that the strong language was justified. "I am surprised by the title - but with what's going on in the biosphere, it's probably a good way to word it."

But is the claim that we are undergoing mass extinction event to rank alongside the five major wipeouts of the last half-billion years justifiable?
...

"The modern biosphere is completely and utterly different from any prior state," Williams says. "This reconfiguration is driving biodiversity loss, because we're squeezing out natural habitats that organisms can flourish in."

Add to this the speed: it's "quite a cocktail of very fundamental changes that all came very fast," Schwägerl told DW. So fast, Williams says, the sixth mass extinction could outpace any before - bar that resulting from a sudden asteroid strike.
...

The PNAS paper warns, "the window for effective action is very short, probably two or three decades at most." Yet there's an argument that framing the issue in apocalyptic terms risks paralyzes us against such action.

"It's really important to have the sense we can still turn it around," Schwägerl says. Otherwise, "people just give up."

"We can still turn it around - or at least slow it down."

"The idea of the Anthropocene helps us to view the history of our species as part of natural history," Schwägerl explains. "It helps us to integrate our civilization into the big planetary processes and the planetary history - it can create a horizon for something better."

In its conclusion, the PNAS paper warns that the ultimate drivers behind mass extinction, such as overconsumption, "trace to the fiction that perpetual growth can occur on a finite planet."

Schwägerl argues that rethinking how we see ourselves in relation to our home planet can help us address damaging ideas behind our misuse of the Earth's resources.

"Economic practice is based on the fantasy that human civilization is somehow detached from nature," Schwägerl says. "We say in economics that environmental effects are an externality - as if nature was something external - no, it's the baseline of every economic activity."

"We need to think about ourselves as part of a continuum that's been unfolding for 4 billion years," Williams adds.

"We need to make sure our brief stewardship of the biosphere preserves that biodiversity. I think if we started to think about ourselves in those terms, we might be able to stand back and become a bit less self-important."
No good can come from leading people to simply give up. For some time I have resisted posting anything on Guy McPherson's apocalyptic predictions for that very reason. Yet what had once been a solitary voice has become, in recent months, a choir. It can no longer be spiked.
The call for radical change in the way we are organized - politically, economically, and socially - is unassailable. Environmental impacts are not an externality no matter how fiercely commercial interests that prey upon free natural capital argue the point.
There is no time left to waste on political leadership that clings to the fiction of perpetual exponential growth on this very finite planet.  And, yes, that means Justin Trudeau but it also means the Tories' Scheer and whomever the NDP will probably choose as their leader. They're invested, all of them, in maintaining this self-destructive status quo.
This idea about carbon pricing? Bollocks. That falls laughably short of the radical change these times demand.

What a precarious tightrope we walk trying to provoke positive change! If we say too much, people run away and hide. If we don't say enough, people continue as is. These next twenty years will be exciting times, for better or worse.


It's never been more important, Marie, that parents do whatever they can to prepare their children to meet the challenging future. Life skills - everything from cooking, mending, gardening, first aid, how to find and purify water, basic carpentry anything and everything that develops confidence and self-sufficiency.

Out here many of us have something resembling a "prepper" approach reflecting the very real risk, we're told, of the Big One, a 9+ upthrust earthquake that our government tells us could leave most of us having to fend for ourselves for an extended period. I have a plentiful supply of batteries, an extensive variety of hand tools (woodworking and mechanical) first aid kit and supplies, dry and tinned foods, plenty of fishing gear, hunting gear including an ample stock of ammunition. My gardening skills are badly in need of refreshing. I really hope my kids will realize they too may need these skills.

Anyong...as told this afternoon "Jesus will save us and overpopulation, money greed and climate change is nothing but a hoax." And that from a very educated woman.
Yes indeed Mound, survival will depend on Sustainability and how to meet the coming challenges. I would like to add to your list. Knowing how to keep sheep, how to sheer sheep as sheep wool is a wonderful insulation and how to knit.

I think all we have left are small gestures.

Do we have the ability to colonize Mars or a moon of Jupiter? Build connected self-sufficient biospheres?

Perhaps, if we could get there. But the first 1000 years or more would likely be tough. Low quality of life.

Here on earth, we will likely beat extinction but the numbers will be small and quality of life might be like on Mars.

Human conceits are so hard to overcome.

We need a lower population, even if it's acts of nature and the earth itself that gives it to us.


Absolutely, Tal. We need to reduce the human population by half, perhaps more. I have often made the point that it took us almost all of the 12,000 year history of civilization to build mankind's numbers to one billion and then, over just two centuries, we've swelled that to 7.5 billion. When I was born we totaled about 2.5 billion and in one lifetime, my own, we've tripled our total. That's the sort of growth you might expect in a malignancy.

However it's much more than total numbers. At the turn of the 20th century average life expectancy in Canada was 50. Male longevity in the U.S. was just over 46. Today in Canada we've gone from a 50 year lifespan to an average 81 years. That's a 60% increase. We live 60% longer which requires a commensurate increase in resources, energy and waste output only it's not really commensurate because, per capita, our consumption has likewise grown substantially. We live in bigger houses than we had in the 50s and they're climate controlled. We have more cars. We travel. We have more stuff of all descriptions, all the mod-cons. More of the stuff we have is incipient junk - major appliances, for example, that go to the recycling yard after 7 or 8 years. Contrasted to what the average North American of 1900 was like we're monsters of consumption today.

Another way of looking at it is to compare India and the U.S. since WWII. The U.S. has grown by about 100-million which India grew by around a billion. Yet that 100-million Americans had the same or slightly greater environmental footprint as those billion Indians. Only now both India and China are developing their own "consumer class" seeking an average standard of living very close to our own.

A couple of years ago I read a report written by three leading Chinese economists. They discussed their country's emerging entrepreneurial/technological class which had quality of life aspirations that the Beijing government had to accommodate. Yet these aspirations had spread into the general population and the economists identified a real problem - there are simply not enough resources on the planet to satisfy that demand. They concluded that China, and India, would have to abandon their egalitarian underpinnings and create islands of prosperity for the most important contributors floating on a vast sea of the impoverished. They foresaw great social upheaval destabilizing the state and its government but they stopped well short of addressing how the central governments would have to subdue their own peoples.