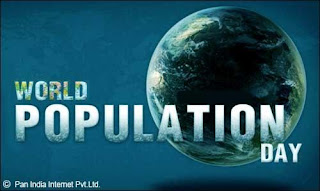 Matej Gaspar is a very special young man. He was born on July 11, 1989, in Zagreb, Croatia - and was designated as the symbolic five-billionth person concurrently living on Earth. United Nations (UN) statisticians had calculated that some time in July of that year, the world population would cross the five billion mark. Gaspar became the milestone baby because on July 11, when the announcement was to be made, then-Secretary General Javier Perez de Cuellar happened to be in Zagreb.

The "Day of Five Billion," as Gaspar's birthday became known, garnered huge interest and as a consequence, the UN established the date as World Population Day. It's an occasion to "enhance awareness of population issues," according to the organization.

Forty years before Matej Gaspar was born, the year I was born, the Earth's population was bubbling away at around 2.5 billion. By the time Matej showed up that record 2.5 billion had doubled to a record 5 billion. And now, when Matej is still in his prime, we're at 7.5 billion heading, by many estimates, to 9 billion, perhaps even 12 billion by later this century.

To add a touch of perspective it's helpful to remember that it was just two centuries ago that mankind first broke the one billion population record. Nearly 12,000 years of human civilization to reach one billion. Just 200 years to expand that by more than sevenfold. What could possibly go wrong?

Earth is simply oversaturated with human life. By some calculations, our planet's sustainable carrying capacity for humankind and other species was reached in the early 70s when we reached 3 billion and our per capita consumption of resources was a good measure more modest than it is today.

At 7.5 billion we, mankind, you and me, are consuming vastly more resources than Earth can supply. And we're choking out other life on Earth, plant and animal, marine and terrestrial. There's not enough habitat, not enough food, not enough refuge for those other life forms to sustain their natural populations. We're driving some species to extinction and we're hunting other species to the same end. Witness how we have collapsed global fish stocks, one species after another.   Our population is dooming their populations and we imagine that won't come back to wreak havoc on ourselves in due course.

If you want more information on our extermination of other life on planet, marine and terrestrial, check out the Living Planet Report 2012, 2014 and 2016.

I've been hammering this stuff pretty hard over the past few days but, Jesus Christ on a crutch, are we out of our freaking minds? Our house is ablaze and we haven't got the brains to call the fire department. What is so wrong with us?
Posted by The Mound of Sound at 9:43 AM

The problem, Mound, is that while individual humans can think (some amazingly well) groups of humans don't; we swarm. Group behaviour tends to sink below what individuals in the group say they aspire to. Anyone who has watched a teenage son amongst his friends knows that phenomenon.

The population bomb scares me more than any other risk because it carries with it the ability to cancel solutions to any and all other problems. Population growth is the most difficult to address because we are so emotional about it.


The problem as I see it Toby is that just as climate change, overpopulation and over-consumption are inseparably linked the quid pro quo in effective resolution such as slashing emissions, curbing consumption and reducing population is economically unacceptable to the Western world and culturally and religiously intolerable to the Third World. Remember the "better dead than Red" mantra of the Cold War? Like that only much worse given the certainty of the outcome of our collective intransigence.

If I look around me right now I can't see any evidence of the 3 great problems of our time. Humans in disaster situations are notorious for not reacting until it's too late. Out of sight out of mind. Sadly I have a feeling the over-population problem will solve itself.

AniO, I would have to suggest you go back to the surface where you'll find plenty of evidence of at least one, probably two if you look hard enough, of the "big three."

Canadians don't have the overpopulation issue although we are expected to experience it indirectly. Over-consumption, that is more tangible. It takes so many forms including species depletion and extinction, resource depletion and exhaustion, the accumulation and back up of waste of all description.

Were you on the International Space Station, a lot of this would be visible to the naked eye from the viewing cupola - desertification, deforestation, and algae blooms produced by excessive use of agricultural and industrial chemicals that now regularly appear in our lakes, rivers and coastlines. You see it at the cash register when you find prices spiking due to shortages. The collapse of fish species from overfishing is a fine example.

We certainly experience it here from the premature loss of our mountain snowcaps, the increase in forest fires, pest migration (beetles, etc.).

There's abundant evidence if you don't avert your eyes.

As for the over-population issue self-correcting somehow peacefully, don't count on it. Have a look at Gwynne Dyer's book, "Climate Wars," or read the Pentagon's last two Quadrenniel Defense Reviews or the parallel studies at Britain's Ministry of Defence. No one is expecting any peaceful resolution of this.


I understand the point, NPoV, but sage advice from The Guardian probably won't have a lot of impact where it's needed - Asia and Africa.

There is no resolution to overpopulation. We literally don't have the capacity to even think about resolving it without flying apart.

We are a fake intelligent species.


There will be a resolution, Dana, but I suspect it will be chaotic and violent. Imagine if you had a pasture that could support four cows per acre but you dumped several bales of alfalfa in that field and brought in twenty cows. They would likely do just fine so long as there was enough alfalfa to keep that herd fed. What happens when the alfalfa finally runs out?

That is the predicament we're in. We're vastly exceeding our planet's ecological carrying capacity at a factor of 1.7 times Earth's ability to replenish our essential resources. We're doing this by consuming our biosphere's reserves and we're doing that faster with each passing year. The real problem is that we can't go on a diet. We are utterly dependent on continuing to consume resources our environment cannot replenish. That's our bale of alfalfa and it's dwindling fast.

Despite all this, despite the evidence of what may soon befall mankind, our political caste is incapable of responding. Our governments remain mired in the quest for perpetual, exponential growth where the ecological and resource foundation to bolster that pursuit has long vanished. That's why I've taken to describing this as civilization's "Thelma & Louise" moment.

Which seems to confirm the hypothesis that all intelligent life is self-extinguishing.

I should have been more clear. We, ourselves, through deliberate, voluntary action are incapable of resolving it - other than by extremely destructive violence.


Yes, I expect we do have to rule out peaceful, collaborative efforts to do what's actually necessary. I'm sure that's not on.

Anyong......Mound "Anio" means "no" or "disagreement" in Korean. Is this person Korean? Possibly! If so, it is not difficult to understand their comment. Most Asians think that North America is so large, it can withstand all peoples of the world. With the population in South Korea at 50,704,971 in a land area that would fit inside Alberta with room to spare, it isn't difficult to understand this person's comment. South Korea at this point in time seems to not be concerned with the environment. Sadly, not since President Roh, Moo-Hun's death in 2009.