It's Worked (So Far) for Tony. Maybe It'll Work for Terry.


Say what you like about Britain's beleaguered prime minister, Theresa May. No, seriously, say what you like. There must be something. Brexit was a good idea? No. Calling a snap election was a masterstroke of brilliance? Probably not? Grenfell Tower? No, definitely not Grenfell Tower. You see, I come up empty. I can't find a single thing about PM Terry that's remarkable much less remotely admirable. Oh, wait, I know. Maybe she still has a pulse but I'm not betting the farm on it. In Britain they've got a new name for their cadaverous prime minister, "Maybot."

For all that, Terry is digging in, Blair style. She insists she has "no regrets" about calling the snap election that cost her government its majority and propelled her arch-rival, Jeremy Corbyn, to prominence. It's a bit like Michael Jackson saying he had no regrets setting his hair on fire in that Pepsi commercial. 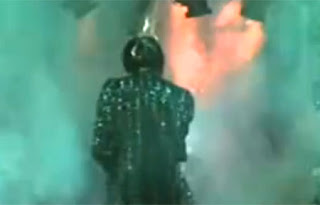 May said: “There’s two ways the government can react to that. We can be very timid and sit back or we can be bold and that’s what we are going to be.”

The Conservative leader also said: “I think it was the right decision to actually call that election. I’d hoped for a different result.”

Meanwhile the Maybot is making the most of Angela Merkel's tea party in Hamburg. She's taken her begging bowl to the G20 in search of trade deals, just about anything to take attention away from her Brexit fiasco.

She even got a sit down with The Donald who assured her that a new trade deal between the UK and the US would be completed "very, very quickly." I wonder if she's read his book.

But it may be Maybot's adversary, the EU, that comes away from Hamburg with a trade deal. Word is that CETA, the Canada-EU free trade deal will come into effect on September 21.
Posted by The Mound of Sound at 8:25 AM

It was obvious while Grenville Tower was still in flames that Theresa May was done as PM, that she needs to go. While she didn't cause the fire she wears the years of deregulation and austerity and all that entails. Since May won't go voluntarily, it is a wonder that her Party doesn't give her the English shove. My suspicion is that no one else wants the job.

Something nice: her extremities are the envy of Trump and every other leader.


Yes, Toby, she needs to go and my guess is she won't still be hanging around for the next Ides of March either. And it could be that no other Tory is keen to take on the responsibility - and the likely blame - for Brexit either.


Thanks, Chris. She's now a character in a Tim Burton production. I wonder if he's thought of that?