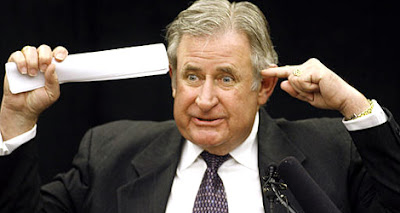 I used to sort of like Ralph Klein, until he quit drinking. Then he turned into a real son-of-a-bitch.

While he may be largely forgotten today, he's left Alberta a lasting legacy and it's going to cost the people of the Wild Rose province countless billions.

In the June 12, 1991 decision, a panel of Court of Appeal of Alberta judges unanimously ruled that "abandonment of oil and gas wells is part of the general law of Alberta enacted to protect the environment and for the health and safety of all citizens."

The responsibility to properly abandon a well was binding on all who became licensees of oil and gas wells, even in bankruptcy.

The ruling came to be known as the Northern Badger case.

The anxiety it triggered was profound, but it was replaced with a newfound confidence after an unexpected boom in oilpatch activity and Ralph Klein's swearing in as Alberta premier in December 1992.

Under Klein, the Orphan Well Association was established. Wells are called “orphans” when there is no solvent entity to carry out abandonment and reclamation responsibilities. This industry-funded organization saw the already enormous problem of old wells multiply.

With Klein calling the shots, the oilpatch effectively escaped accountability for billions of dollars in reclamation obligations in exchange for merely plugging some wells after companies disappeared. In fact, the Orphan Well Association has only reclaimed about 700 sites in more than 15 years.

And today, Klein's environmental liabilities are about to blow up in the face of Albertans.

A joint government/industry committee reported in 1992 that new companies with “inadequate financial resources to meet future well-abandonment liabilities” were taking responsibility for wells from established companies. In some cases, “well-licence transferors have disposed of valuable assets, leaving only liabilities within a corporate shell and thereby generating future orphan wells.”

And regulators weren’t duped; they didn’t just look the other way while these environmental liabilities were passed around like hot potatoes; they actively sabotaged their own regulatory programs to further facilitate this downloading of risk.

The only program that even began to address abandonment and reclamation with any real enforcement was the Long Term Inactive Well Program (LTIWP) launched, after considerable delay, following the 1997 election. With enforcement provisions that scaled up to legal action, the LTIWP was a five-year plan to safely plug wells that had been inactive for more than a decade.

It had some success in its first year, but as enforcement escalated in the second year, regulators lost their nerve. A second progress report was never produced and a dramatic change was announced in the third year. The Base Well Count assigned to each producer was supposed to be unchangeable. Regulators then let it be manipulated so companies could shift wells to smaller and smaller companies.

The rule change completely undermined the program’s objectives and allowed industry to game the program and loot it of deposits companies paid for well abandonment costs that could otherwise be left to taxpayers. Outrageously, regulators actually demonstrated to companies how to do so.

Read the National Observer report in its entirety. It's a fascinating but disturbing account of how governments can collude with industry at the direct expense of the public. It's an illustrative tale of legislative and regulatory capture, how industry can corrupt government into working for its interests and against the public interest. It also demonstrates how our complacency fuels their perfidy.

Ralph Klein was a lot of things to Albertans but first and foremost he was the oil industry's man.

No problem. Jason Kenny's Conservatives will simply blame Rachel Notley and the NDP for this. Once elected Premier, Kenny will sweep it under a rug.


With their royalty streams drying up and these massive bills coming due any government in Alberta will be in a jam... unless they take the coward's way out and ignore this looming ecological disaster.

Agreed, Mound, however Albertans are masters at passing blame. The list of guilty will include the Alberta NDP, the Trudeau Liberals (both senior and junior) Christy Clark and the BC Libs for stalling on the pipelines (who cares about details), Newfoundland (no reason - it's just there), and, of course, Quebec. Albertans have had a grudge at Down East since Calgary had more horses than people.

There's a couple of companies and projects in Alberta, turning orphan wells, into geothermal, so there's hope.

Cleaning up the abandoned wells and the Tar Sands would provide lots of work for the fossil fuel workers during the transition to green... we should get the $ from the oil cos before its too late.