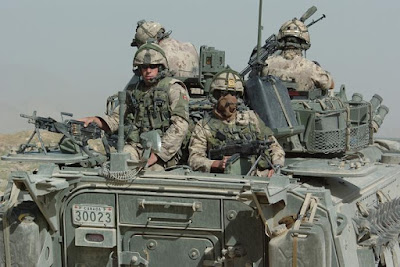 You probably remember when Donald Trump said that America's biggest failing in the Iraq war was that it failed to take Iraq's oil. Not pay for it, take it. It was only fair that Iraqis pay for America's uninvited invasion of their country. That had such a lovely, medieval ring to it.

Having buggered up Iraq with nothing to show for it save two or three trillion in debt, the current majordomo seems interested in helping Afghanistan to rid itself of its pesky mineral resources. New York Times article here.  NY Mag article here. Gizmodo here.

The Trump White House has been consulting with high-profile war profiteers who have argued that the way forward in Afghanistan is to further privatize military operations in the country. White House Chief Strategist Steve Bannon and senior advisor Jared Kushner reportedly "recruited" both Feinberg and Blackwater founder Erik Prince to lay out a war plan for the president.

Critics denounced this development as a step toward "colonialism," and commentators had similar words for Trump's apparent attraction to Afghanistan's mineral wealth.

Canada, yes Justin Trudeau's Canada, is already collaborating with Saudi Arabia's rampant campaign of war crimes in Yemen. Enough. If we didn't already have good reason to steer clear of Afghanistan, we've got compelling reasons now.
Posted by The Mound of Sound at 2:42 PM

I expect Canada's mining companies will donate heavily to the party that gets them a seat at the table when Afghanistan's mineral resources are carved up. Business interests always come before Canadian lives, Mound. That's why we're in the state we're in.

Before committing more Canadian soldiers, Trudeau should ask the Trump administration to explain the legal basis for Eric Prince's "new war plan" in Afghanistan. As far as I can make out, there is none.

There are three possible legal justifications for using force in another country: 1) self defence, 2) under a UNSC resolution authorizing it, and 3) at the invitation of that country's government.

It can't be self-defence, because Bin Laden is dead, according to Karzai AQ is no longer in Afghanistan, and the US justifies its stay by saying it is fighting the Taliban, which had no part in the 9/11 attack. Besides, self defence must be proportional and there's no way that continuing to wage war against a different party some 16 years after the 9/11 attack is in any way proportional.

It can't be by UNSC resolution, because there is none that currently authorizes the use of force. The last UNSC resolution authorizing use of force under ISAF expired in 2011, and NATO's current Resolute Support Mission only allows training.

And finally, it can't be at the request of the Afghan government since that would have to have been the Taliban government that was de facto ruler of Afghanistan at the time of the US invasion. It's ridiculous to pretend that a country can invade another, install a puppet government that has only ever controlled a small part of the country, then claim to be legitimately at war in the whole country at the request of the puppet government. That would be an extremely dangerous legal precedent to set.

Without answers to the legal basis for a new war, Trudeau and Canada's mining companies would be well advised to stay out.

You make good points,Cap, but these are the sort of questions our government our government has been resolutely ducking since the Saudi death wagon deal. It's morally degrading to the country but, hey, business is business.