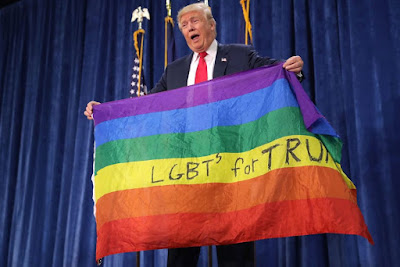 US attorney general, Jeff Sessions, has garnered considerable sympathy for the sadistic attacks  he's endured from Donald Trump lately but the little bastard really is a despicable low-life and not just for his overtly racist past.

Donald Trump/Jeff Session's justice department has just filed a brief claiming that, " the Civil Rights Act of 1964 does not protect “homosexual” workers from discrimination. The brief says that discrimination based on sexual orientation is not sex discrimination—directly contradicting Title VII of the Civil Rights Act, which “makes it unlawful to discriminate against someone on the basis of race, color, national origin, sex (including pregnancy and gender identity) or religion.”

“The essential element of sex discrimination under Title VII is that employees of one sex must be treated worse than similarly situated employees of the other sex, and sexual orientation discrimination simply does not have that effect,” the DOJ brief states.

The Trump/Session case boils down to this: "Nope, nosiree, look at that list. 'Homo' ain't even on that list."

While Title VII seems straightforward in protecting workers from discrimination based on sex, including pregnancy and gender identity, its lack of specific language in regard to sexual orientation has allowed for workplace discrimination against LGBT people. However, the Equal Employment Opportunity Commission, a federal agency that handles civil rights disputes, has insisted for years that anti-gay discrimination is based on sex stereotyping and amounts to discrimination on the basis of sex.

The DOJ’s statements will not yet have concrete effects on actual workplace policy because the brief was in response to a court argument. But the comments set a dangerous precedent, given that the DOJ was not asked to participate or comment on the case—in addition to the fact that the department released the statement the same day President Trump announced a ban on transgender people performing military service.

Two things to bear in mind. This DoJ filing was gratuitous. The government was not obliged to nor asked to intervene. And Session's filing was made on the same day Trump banned transgender people from the American military.

Next up, it's time to repeal that pesky 13th Amendment.  If they'd done that a decade back, America'd been a different place.
Posted by The Mound of Sound at 9:07 AM