Coming Apart at the Seams 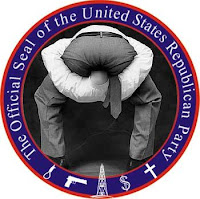 It's almost too grotesque to watch. The wheels are falling off the GOP wagon. Even with a unified government -  control of the House, the Senate and the presidency - the Republicans are unable to repeal Obama's Affordable Care Act and replace it with a gutted version of their own.

For all their legislative majorities, the Republicans are much too divided to deliver even their flagship objective, erasing Obamacare. One group wants the federal government out of healthcare entirely. Another, the Ryan-McConnell crowd, want healthcare gutted enough to free up money for yet another hefty tax cut for the richest of the rich. Then there's the third group who see their own re-election in peril if Obamacare is scrapped.

It's gotten so bad Trump is actually threatening members of his own party, vowing to intercede against them when next they have to stand for office if they defy his will.  Trump knows they're making him look bad, weak and he's preserved that job for himself.

Imagine what it must be like for the Republican rank and file. You almost certainly support one of the three factions and probably reject the other two. That doesn't do much for party cohesiveness and harmony. Whatever path the Republicans take, even if they do nothing, there are going to be plenty of pissed off Republican voters.
Posted by The Mound of Sound at 11:03 AM

Even pissed off Republican voters will vote for an R shaped turd though. Democrat voters stay home if they don't like the candidate; Republican voters just hold their nose and vote for the turd in order to keep the Democrats out.

"A majority of Republicans and Republican-leaning independents (58%) now say that colleges and universities have a negative effect on the country, up from 45% last year."


Damn, Dana, I had to read the report for myself to believe it. What do they want, an American Khmer Rouge? That is a nation in distress.

Why does the name Pol Pot come to mind?

I don't know, Toby. Might it have something to do with my previous reference to the Khmer Rouge? Don't worry about it. I do that all the time.

For once Republicans have picked up on something that might make some sense in an odd sort of way, though I doubt they would get it. They're graduating too many B.Comms and MBAs and too few engineers and others qualified to be engaged in scientific research. When I was trying to locate an article that I'd read a few years ago that discussed generally the negative effect this might have had on the US economy, I tripped over this one:


Now ask yourself whether you ever met a commerce graduate who understood any of the equations that he memorized for his business math exams or whether he remembered them after supper. Then consider this gem:

"I am wondering whether to go to business school or engineering. Business school = less work during university days, and often better paying jobs out of school, especially 5 years down the line and after. Engineering classes are a beast and I don't want to work in factories."

An then this old caption from a cartoon at the height of the 1980s version of Wall Street madness: "This course sucks. I don't want to make things; I want to make money. Can I sue someone?"