Welcome to the Age of Chronic Inundation 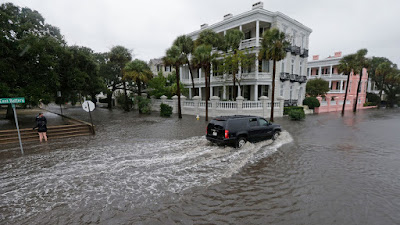 They've coined a term for it, "chronic inundation." That describes flooding when a coastal community's non-wetland area floods 26 times a year or roughly once every two weeks.

The Union of Concerned Scientists has mapped out places already beset by chronic inundation and those that will join the list over the next two decades. The report can be found here.


More than 90 communities, mostly in rural Louisiana and Maryland, already face chronic inundation. Subsidence is an issue in both states.

Miami Beach hasn't hit that threshold yet. But it faces future chronic inundation under the report's most conservative climate change projections, along with New Orleans and Savannah, Ga.

That scenario assumes global warming stays under 2 degrees, as the Paris climate agreement calls for. The picture becomes bleaker in the intermediate scenario, which assumes carbon emissions peak around midcentury and global sea levels rise about 4 feet.

That scenario leads to about 170 communities facing chronic flooding by 2035, rising to 270 by 2060, according to the report.

The “high scenario” — which the researchers warn is becoming more likely — assumes emissions rise through the end of the century, leading to about 6 ½ feet of sea-level rise.

That would chronically flood about 670 communities, including roughly 60 percent of all oceanfront communities on the East and Gulf coasts, according to the researchers.

Chronic inundation denotes something much worse than what's called "nuisance flooding." Regular saltwater inundation can cause major damage to buildings and to buried services - water, sewer and power lines. Chronic inundation may cause coastal residents to leave for higher ground inland.

The Union of Concerned Scientists has posted an interactive graphic showing areas likely to succumb to chronic flooding. It's an eye-opener. The report notes that many of the vulnerable communities have less than 20 years to implement whatever flood control measures they intend to take, if any. If you do check out the graphic bear in mind that no provision is made for storm surge, severe flooding caused by hurricanes, etc.

There's no sign of any similar studies mapping chronic inundation for Canada's coastal communities which is odd given that Montreal and Vancouver/Lower Mainland, two of Canada's three largest municipal areas, are particularly vulnerable.

Miami Beach hasn't hit that threshold yet. But it faces future chronic inundation under the report's most conservative climate change projections...

My expectation is that there will be lots of government money for remedial action in areas where the wealthy have their mansions but the poor will have to abandon and move.