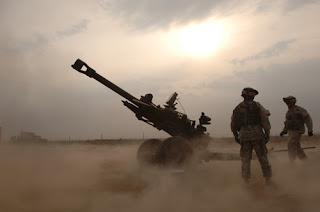 Steve Bannon and Jared Kushner, Trump strategist and son-in-law respectively, think they know how to win in Afghanistan - mercenaries, lots of them, in fact nothing but mercenaries.

Mr. Prince laid out his views in an op-ed in The Wall Street Journal in May. He called on the White House to appoint a viceroy to oversee the country and to use “private military units” to fill the gaps left by departed American soldiers. While he was at Blackwater, the company became involved in one of the most notorious episodes of the Iraq war, when its employees opened fire in a Baghdad square, killing 17 civilians.

The strategy has been called “the Laos option,” after America’s shadowy involvement in Laos during the war in neighboring Vietnam. C.I.A. contractors trained Laotian soldiers to fight Communist insurgents and their North Vietnamese allies until 1975, leaving the country under Communist control and with a deadly legacy of unexploded bombs. In Afghanistan until now, contractors have been used mainly for security and logistics.

On Saturday morning, Mr. Bannon sought out Defense Secretary Jim Mattis at the Pentagon to try to get a hearing for their ideas, an American official said. Mr. Mattis listened politely but declined to include the outside strategies in a review of Afghanistan policy that he is leading along with the national security adviser, Lt. Gen. H. R. McMaster.

Some think Bannon and Kushner could still use their direct access to the man/baby president to do an end run on the generals.

The USA has a privatised Government why not a private army?
LM could have McDonalds ads on the tailplanes of F35's ( to offset costs), the army would be amiss not to have Coca Cola on the turret!
Think about the ads that could be on an aircraft carrier? wow.
The USA would not have those pesky Geneva convention rules to worry about or even a Veterans association.
Gee; this just gets better, why didn't we think of it before?


It would be fascinating to see how the generals would react to that idea.