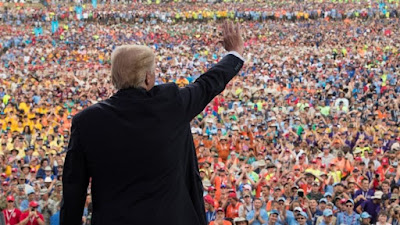 The Republicans assured themselves their 70-year old man/boy president would mature once in office. You morons, the guy turned 71 on June 14. He ain't gonna change. He's not smart enough even if he wanted to, even if he thought he had to in order to survive. No amount of time and pressure and heat can transform that lump of dirty soft coal into a diamond. He's a deviant, a pervert, by his own statement a serial sex offender with a basket full to the brim with his psychological maladies.

Any residual doubt was dispelled when Trump appeared before the Boy Scouts of America. His utterly inappropriate speech was, naturally, all about himself, the electoral college, his wonderful ideas, why America should be grateful to have him with a few shots at Hillary and Obama tossed in for good measure.

It was like a recruiting speech and reminded me of nothing so much as another tyrant's speeches to another group of young boys from another country and in a previous century.

Trump was supposed to be speaking to these kids: 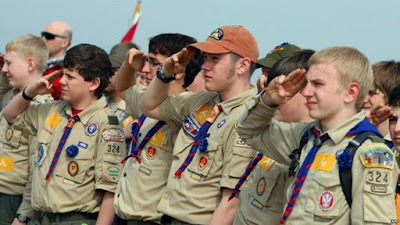 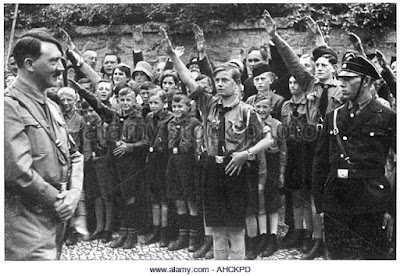 The pathetic response by the BSA is going to cost them dearly.

The Scouts have no one to blame more than their own executive leadership.

"AT&T CEO Randall Stephenson became the president of the BSA just over a year ago, and at the moment he is seeking approval from the Trump administration to sign off on a proposed $85 billion acquisition of media company Time Warner, Inc. “The [Department of Justice] is currently conducting an antitrust review, which evaluates how the deal would affect competition in the industry,” writes QZ. “The process is supposed to be private and apolitical, but there are concerns in Congress that president Trump is trying try to influence it.”

"Among other things, members of Congress have expressed concern that Trump would approve the merger only on the condition that Stephenson order CNN –which is owned by Time Warner — to give the president more positive media treatment."

Tillerson was the former BSA CEO, and under his watch, the BSA "hushed up" a massive pedofillia and abuse scandal,

When push comes to shove with conservatives, event's like "Pizzagate" turn out to be all projection.


I don't know, Jay. What in hell has gone so wrong with us these days? I can't find a convincing explanation. It's like everything has been corrupted. I'm just working on a piece now about the spread of agricultural runoff triggering blue-green algae blooms in our lakes and rivers. We have regulators, federal and provincial, up the yin yang but no effective action to deal with the problem of this toxic contamination of our surface water resource. This is just one example.

Far too many people in our democracies are disengaged, but still sort of vote, on a superficial level.

Part of it is the inequality gap, it's hard to be engaged when you are scrabbling day to day, to get by,

Part of it is the Media, all forms of it. Other than a few rare places, finding intelligent reporting of political, legislative and environmental event's, is pretty much limited to blogs.

Social media has created insular bubbles, where like minded groups of flat earther's and antivaxer's can gather, with out ever having to engage with the "real world",

Social Media company's ranking systems push toxic responses and platforms to the top of the search page, fill your facebook page, cause your twitter to explode,

Corporations have managed not only "regulatory capture", but Fake News, scientific shading and astroturfing.

It takes a lot of time to stay aware, and a "network" of trusted sites.

It's a lot easier to come home, nuke your Lean Cousine, grab a beer, "brain out" on Game of Thrones, than try to figure how you are going to manage to live in retirement, on your pathetic RRSP.

Agree with Jay that part of the issue is the fact that people in general aren’t that engaged in politics or policies, and that the media does a very poor job of presenting political issues in a way that would help people made educated choices. Also a problem that even if you do make an educated choice, that is no guarantee that the policies you voted for will actually be implemented.

The other main issue is that it is just really, really hard to make substantive changes against entrenched interests in a democracy. You mention a report on agricultural run-off, Mound. Without knowing the specifics, I can already map out the reaction to any of those regulatory agencies actually looking to make major changes to how things are being done. Agribusinesses will be screaming bloody murder over “business-killing regulations”, “Save the Farmers” campaigns, and dire warnings about how this will have massive, massive impacts on people’s food budgets (accuracy of the term “massive” being of little importance). At which point the general public will partially wake up and go, “What? Those dirty hippies want me to have to spend (massive amounts more) money on feeding myself and my family to save some fish or something! Hell no!” Even people who would generally be bothered by poisoning lakes and rivers will pause to reconsider if they think they’ll wind up paying more for food if the government does something about it. The end result being that you might get some incremental change, with the people who make said change still likely paying a political price for their reasonable, but now unpopular, move.