We've Poisoned the Arctic? Really? Already? How in Hell..... 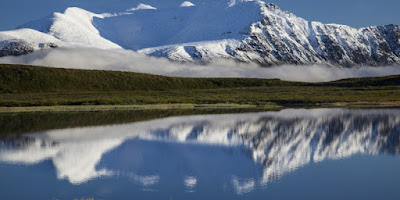 Scientists have found large concentrations of mercury in the Arctic tundra. No, it's not naturally occurring. So who put it there? Who do you think?

The remote Arctic tundra may seem like the last place on Earth human pollution should be causing a problem - yet it's filled with mercury contamination. And that mercury leaks from the soil into rivers and ultimately the Arctic Ocean, contaminating the fish and other sea life that native communities rely on for survival.

Now, in a new study, published Wednesday in the journal Nature, scientists have begun to outline how the mercury is getting into and moving through the landscape in the first place. And the short answer is: It's our fault it's there in the first place, and climate change could now make that even worse.

The study finds that the majority of the contamination in the Arctic tundra came from a gaseous form of elemental mercury, carried through the atmosphere from other parts of the world, where it was emitted to the atmosphere as a result of the burning of coal and other industrial activities.
...

They're still exploring some of the reasons the Arctic is such a mercury hot spot when it's so far removed from the industrial activities that release the pollution into the air. For one thing, once mercury is in the atmosphere, it's free to travel all over the world - it doesn't necessarily just stay in the spot where it was emitted. It can move out of the atmosphere and into plants and soil in other parts of the world just as it does in the Arctic, Obrist noted - but in places with more sun and higher temperatures, chemical reactions often cause it to move right back into the atmosphere, he said.

In the Arctic, on the other hand, conditions are a bit different. The new study suggests that a great deal of the mercury in the landscape is taken up by vegetation during a small portion of the year, when snow is melting and plants are growing. The vegetation has a relatively short window of time to flourish, and afterward it becomes covered up with snow and ice again for seven or eight months of the year. The result is that the mercury becomes more or less sequestered in the soil, without access to the sunlight and heat that might cause it to react and move back into the air.

“So we believe the Arctic really is an important depository for global mercury pollution,” Obrist told The Post. “Once it reaches these Arctic soils, it's building up to high levels.”

I don't suppose there's any point mentioning that refining bitumen and the petroleum coke it carries also releases mercury (and a bunch of other nasty stuff) into the atmosphere.

This story, Mound, also serves as an apt symbol of how we have befouled our nest, eh?


We seem to be running into so many problems, Lorne, that we can no longer undo. They pile up, one atop the other. It was possible, barely perhaps, at one point to dismiss Guy McPherson as an outlier. Now he's a lone voice no longer.

We've been lulled into complacency for the last 20 years by reports that dire threats might emerge by 2100 if we didn't change our ways. 2100 - no skin off my nose. Only those were political estimates, ginned up numbers to justify "wait and see" policies.

How many of us recognize that we're challenged by four tightly interconnected threats - climate change, overpopulation, over-consumption and ocean acidification? Few I've met grasp how those are linked to create a very deadly synergy. Fewer still realize that you have next to no chance of resolving any of them without effectively addressing them all.