George Orwell, Why Did We Ever Doubt Him, or, Remember When We Thought "1984" Was a Novel? 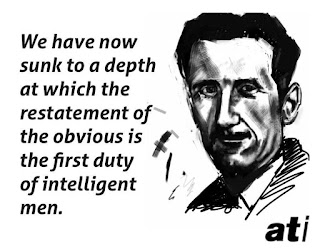 Foreign Policy's Thomas Ricks writes that the doubters were wrong and Orwell's mistake was he got the year wrong.


Harold Bloom wrote in 1987 that Orwell’s great novel of totalitarianism, 1984, threatened to become a period piece, such as Uncle Tom’s Cabin. Even the literary critic Irving Howe, a longtime supporter of Orwell, had thought it possible that 1984 would have “little more than ‘historic interest” for future generations.

Yet instead of fading away, Orwell has enjoyed a new surge of global popularity. The passing of the historical context of 1984 seems to have liberated the novel, its message speaking to a universal problem of modern humankind.
...

For present-day Americans, 1984’s background of permanent warfare carries a chilling warning.
In the book, as in life in the United States today, the conflict is offstage, heard only as occasional rocket impacts. “Winston could not definitely remember a time when his country has not been at war,” Orwell wrote in 1984. (The same is true of all Americans now in their late teens or younger.)

In an era when U.S. wars are waged with drones firing precision-guided missiles, and with small numbers of special operations forces on the ground in remote parts of the Middle East, with infrequent attacks in cities such as London, Paris, Madrid, and New York, this passage from the novel is eerily prescient:

'It is a warfare of limited aims between combatants who are unable to destroy one another, [and] have no material cause for fighting.… [It] involves very small numbers of people, mostly highly trained specialists, and causes comparatively few casualties. The fighting, when there is any, takes place on the vague frontiers whose whereabouts the average man can only guess at.… In the centres of civilization war means no more than … the occasional crash of a rocket bomb which may cause a few scores of deaths.'

The second driver of the current Orwell boom is the post-9/11 rise of the intelligence state. We live in an intrusive, overweening state in both the East and the West. In the early 2000s, the U.S. government regularly killed people in nations with which it was not officially at war by using remote-controlled aircraft. This tactic became known as “signature strikes,” which target men of military age showing a threatening pattern of behavior associated with terrorists, such as talking to known terrorists by telephone or attending a meeting with them. Several hundred of these strikes have been carried out in Pakistan, Yemen, and Somalia. And now metadata collection — the gathering of trillions of bits of information that the intelligence community analyzes in order to recognize previously unseen patterns — allows governments to quietly compile dossiers on the behavior of millions of individuals.
...

Third, and perhaps most shocking, is the way the use of torture in 1984 foreshadows how today’s state uses it in an endless “war on terror.” After 9/11, for the first time in American history, torture became official policy. (Before then it had been used occasionally but always in disregard of the law, and sometimes it was prosecuted.)

To better understand 2017, return to Orwell’s three best books. First, Homage to Catalonia, in which he shows that the left can lie just as much as the right, and becomes skeptical of all exercise of power. Second, Animal Farm, which he called a fairy tale — an adult version of a tale of disenchantment. Finally, 1984, in which Orwell updates the horror story. His monster is not Frankenstein, but the modern state.
Posted by The Mound of Sound at 12:54 PM