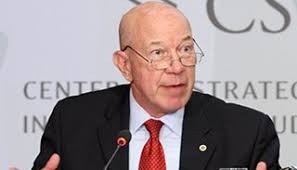 In this role, Roberts will “prevent, protect against, and respond to weapons of mass destruction threats,” according to the DOD website. He’ll also advise the secretary of defense in “matters concerning nuclear, chemical, and biological defense programs.”

Roberts has an extensive resume, including 25 years in the Marine Corps and a couple of nuclear weapon–related policy positions at NATO. He’s also a proponent of first-use nuclear policy. In a lengthy essay for The National Interest last year, he criticized President Barack Obama for considering banning the U.S. from launching nuclear weapons before others do. The piece, titled “America Must Be Ready To Nuke First,” argues that America must be first-use to stave off Russian aggression.

Great, just great. Who can forget during the 2016 campaign when it emerged that Trump had asked his briefers what is the point of having all these nuclear weapons if America can't use them. So now we've got Dr. Strangelove joining the Trump administration.

"The best defence is a good offence".

If only keeping the world safe was a football game.