I Suppose We've Got It Coming 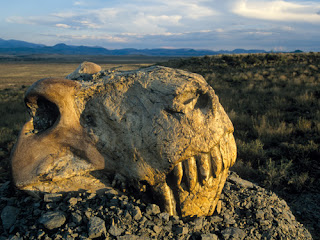 New research confirms that Earth's sixth mass extinction is underway and it's further along than we imagine.  One of the first five was caused by a major asteroid impact. The others resulted from greenhouse gases in the atmosphere. Now mankind has managed to replicate those earlier four extinctions.

To compound our fossil energy addiction we have also increased our population more than seven fold in under two centuries and increased our consumption of resources even more than the increase in our numbers. We, mankind, so over-consume our planet's resources that we've not even leaving enough to sustain all the other species that share Earth with us.


The new study, published in the peer-reviewed journal Proceedings of the National Academy of Sciences, eschews the normally sober tone of scientific papers and calls the massive loss of wildlife a “biological annihilation” that represents a “frightening assault on the foundations of human civilisation”.

Prof Gerardo Ceballos, at the Universidad Nacional Autónoma de México, who led the work, said: “The situation has become so bad it would not be ethical not to use strong language.”

Previous studies have shown species are going extinct at a significantly faster ratethan for millions of years before, but even so extinctions remain relatively rare giving the impression of a gradual loss of biodiversity. The new work instead takes a broader view, assessing many common species which are losing populations all over the world as their ranges shrink, but remain present elsewhere.

The scientists found that a third of the thousands of species losing populations are not currently considered endangered and that up to 50% of all individual animals have been lost in recent decades. Detailed data is available for land mammals, and almost half of these have lost 80% of their range in the last century. The scientists found billions of populations of mammals, birds, reptiles and amphibians have been lost all over the planet, leading them to say a sixth mass extinction has already progressed further than was thought.

Let that sink in. We have triggered the sixth mass extinction in the multi-billion year history of our planet. We've done it in barely two hundred years and we've done it with fossil fuel energy. And, despite all this, despite all the science and the mountains of  evidence, despite the worsening danger to the continuation of life on Earth, we have a prime minister and provincial premiers dedicated to the extraction, export and consumption of ever more fossil energy including the world's highest-carbon, filthiest ersatz petroleum, bitumen.

The paper goes farther than many we've seen that focus on climate change. This study incorporates the two other existential threats - human overpopulation and our rapacious overconsumption of the planet's resources, renewable and non-renewable.

Wildlife is dying out due to habitat destruction, overhunting, toxic pollution, invasion by alien species and climate change. But the ultimate cause of all of these factors is “human overpopulation and continued population growth, and overconsumption, especially by the rich”, say the scientists, who include Prof Paul Ehrlich, at Stanford University in the US, whose 1968 book The Population Bomb is a seminal, if controversial, work.

“The serious warning in our paper needs to be heeded because civilisation depends utterly on the plants, animals, and microorganisms of Earth that supply it with essential ecosystem services ranging from crop pollination and protection to supplying food from the sea and maintaining a livable climate,” Ehrlich told the Guardian. Other ecosystem services include clean air and water.

“The time to act is very short,” he said. “It will, sadly, take a long time to humanely begin the population shrinkage required if civilisation is to long survive, but much could be done on the consumption front and with ‘band aids’ – wildlife reserves, diversity protection laws – in the meantime.” Ceballos said an international institution was needed to fund global wildlife conservation.

To my Liberal friends and New Democrats too, how do you square that circle? How do you support Canada as a petro-state? How do you write off the future of your grandkids and theirs? How do you support governments that would leave us trapped in the pursuit of perpetual exponential growth in GDP when we're already far past the ecological carrying capacity of our planet? It's like trying to battle lung cancer by going from two packs a day to three.

p.s. If you want more information on our extermination of other life on planet, marine and terrestrial, check out the Living Planet Report 2012, 2014 and 2016.

I'm not concerned with "saving the planet".
I think the earth itself is quite capable of healing from even the worst wounds inflicted on it by some of its inhabitants.
Of course that healing process will inevitable have to involve the elimination of a good portion of its terrestrial inhabitants.
It's US who are the real ones in danger. The earth will pull out of this dilemma just fine, I think.