It's Time Halifax Said Good Riddance to that Sonofabitch. 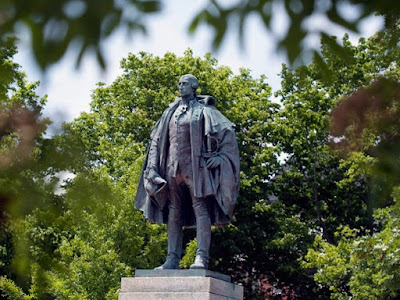 The City of Halifax has responded to First Nations protests by putting a shroud over the statue of Edward Cornwallis, the city's founder.

It seems the Mi'kmaq people still hold a grudge over Cornwallis' 1749 "scalping proclamation" by which he offered a bounty for anyone killing a Mi'kmaq. Fair enough, I suppose.

In fact, Cornwallis was a son-of-a-bitch, through and through. From Wiki:

Cornwallis played an important role in suppressing the Jacobite rising of 1745.[3] He fought for the victorious British soldiers at the Battle of Culloden and then led a regiment of 320 men north for the Pacification of the Scottish Highlands. The Duke of Cumberland ordered him to "plunder, burn and destroy through all the west part of Invernesshire called Lochaber." Cumberland added: "You have positive orders to bring no more prisoners to the camp."[6] Cornwallis's campaign was later described as one of unrestrained violence.[7] Cornwallis ordered his men to chase off livestock, destroy crops and food stores.[8] Cornwallis's soldiers used rape and mass murder to intimidate Jacobites from further rebellion.[9]

While I agree with you, Mound, I see a problem. There are a lot of statues of prominent people with a dirty past. There could be a lot of statues to tear down. It's not a matter of rewriting history but writing all of it including the ugly stuff.

Maybe a bronze plaque could be mounted next to Cornwallis detailing what he did to the Mi'kmaq.

And the Scot's, given that it is Halifax, Nova Scotia,

And in broad detail.

Indeed, Jay, those of us of Scots or partial Scots descent and with some knowledge of what Cornwallis inflicted on the highland Scots after Culloden, how his forces slaughtered men, women and children, should join the Mi'kmaq in demanding this stain be erased. Let's never forget that it was the Scots who were so instrumental in creating Canada. There's a reason why Canada is sometimes called Scotland's revenge on England.

.. this 'stuff' gets complicated..
some of it historical, other aspects hysterical..
the 'old snots' or old stock may take offense
and we never know what may set Ezra Levant Inc off
or dear departed monarchists Stevie/Ray/Laureen Harper et al
and then we have evangel migrants like Kenney or Scheer
and their underwear is so clean n tight it must truly hurt their shriveled junk

i often suggest folks watch Last of the Mohicans.. if they missed it
Louis L'Amour.. one of my fave authors.. always said
he wished he wrote more of his books, set in Canada eh..
He thought it was the real frontier.. wilder, crazier, bigger.. stunning..

The absurdity of colonialism.. is rep'd best by Monty Python..
but the atrocity thereof.. must never be trivialized..
So called 'civilized' colonial societies.. were fine with murder & mayhem
with eliminating peoples.. as if they were pests or bothersome.. trash

Considering the devastation to peoples and land and waters and species and the planet in general of their policies there is not a single pink ( my native brothers tell me i am not white....you are pink) person worthy of any sort of statuary in the last 150 years in Canada.
Scrap the scum.
Canada was a self regulating ecosystem with people integrated with in it for thousands of years. Now , no matter what your origin , it is emburdened with a collection of half-baked failing policies imposed from the "old country" which will never work out in the long run.
We are a long way down a very wrong road.
mike/lungta

Mike, it's fair to say that Canada has inherited its modes of organization - industrial, economic, political and social - from times past and lands distant. That's manifest from our head of state all the way to the gowns barristers wear to appear in superior courts. We followed Britain's model of industrialism before integrating our manufacturing base with the American model. Our House of Commons mirrors Westminster. Our social structures were implanted by the French, the Brits and then the United Empire Loyalists who populated Ontario. A lot of our policy and thinking and ways were adopted without much thought for how they served a nation state such as Canada that was so distinct from any European nation, even from the US. The trick is to separate the wheat from the chaff and not allow our nation to bog down in the clutter.

That statue has been a point of contention for quite some time here in NS. Years in fact. We also have Cornwallis Street in Halifax, the abandoned Cornwallis naval base in Annapolis County, once a huge training establishment in WW2, and the Cornwallis River running through part of the Annapolis Valley, while the grand old Cornwallis Hotel lies in Kentville. Probably a bunch of places I either cannot remember or haven't heard of. All need renaming, while the statue needs to removed and melted down. Of course, if that really seems likely, some historical art expert will surface and rabbit on about historical significance of the statue itself, not the man himself. There's always some well-meaning dolt anxious to preserve things not worth preserving. Lookit all those protected houses. Historical significance. Gronk to most of them, they've been rebuilt and aren't original anyway, not like those piles of ancient stones called castles in the UK.

The demonstrators were warning on Wednesday they were going to pull the statue off its pedestal this past Saturday, but the establishment harumphed at that. Civic workers stuck a black tarp over it while the mayor of Halifax waffled on as he generally does when H-hour happens on any real issue. The Mi'kmaq were mollified until the dignitaries left, then swapped the black tarp for a bright orange one. Good one.

Natal Day, the annual civic holiday, is coming up on August 7, and the ultimatum is clear. Years of jawboning have got nowhere, as is typical in this fair land of ours where everyone sets up committees, both federal and provincial on anything controversial, receives a report from some lot of poor bastards who attempted to produce quality, and then dusts off a piece of shelving to store it with not a shred of evidence that anyone plans to do anything about it. That's Canadian compromise for you. Complete inaction and hope those pesky people causing the "problem du jour" go home, forget about it, get sozzled and have a barbecue. The dauphin's parliamentary committees on assisted dying and electoral reform got this treatment too.

So the Mi'kmaq are going to do something if the authorities won't. Halifax has to present them a plan by August 7 or else. So naturally, everyone else has gone back to sleep in the meantime.

Two weeks ago when the Mi'kmaq were having a ceremony at the statue, and the racist Canadian Forces Proud Boys came and had a sniff around and chucked the demonstrators flowers in the garbage, while letting the indigenous folks there know they were a defeated people and should get over it - the white man rules line. Then they went for beers. After the usual pronouncements that their conduct was unbecoming by the Admiral of the East Coast fleet, itself a collection of old barges in constant need of maintenance, and then a stronger message arrived from the Head of the Defence Staff, Vance. Since then, all has gone quiet. Yup, very Canadian. So that's all right then. Just like your average twat thinks Khadr shouldn't get compensation because they cannot be bothered to educate themselves, 78% or so of the knuckleheads we call fellow citizens that is, what's the likelihood anybody in the NS establishment will pay the slightest bit of attention to what the Mi'kmaq have said? C'mon, you know the answer - diddly squat.

There may be some ructions on August 7, I hope so. The only way anything will happen, because if you just natter, the establishment will natter back at you for ever. Cynical? You bet I am. Sardonic in tone? Well, how should I be?

Get rid of it. Then come to southern Ontario...get the Confederate flags off of apartment windows, and out of the windows of large pick-ups driving by my place in Brant's Ford. I guess you can't legislate racism away- but we sure can make it 'uncomfortable' for them.