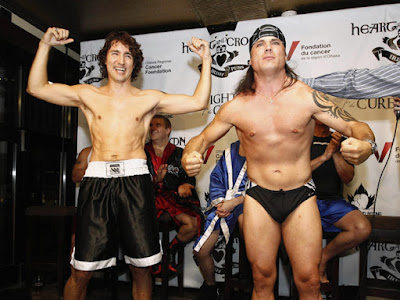 When I read that line beneath the photo of a bare chested Justin Trudeau standing beside a bare chested Patrick Brazeau, I thought, "oh no, not now." That was years ago. Why is it coming up now?

The answer - JT is drawn to publicity like a moth to a Coleman lantern. In his recent Rolling Stone interview the Dauphin was asked about his boxing match with the Tory senator.


“It wasn’t random,” Trudeau told Rolling Stone magazine in an interview published this week. “I wanted someone who would be a good foil, and we stumbled upon the scrappy tough-guy senator from an indigenous community. He fit the bill, and it was a very nice counterpoint. I saw it as the right kind of narrative, the right story to tell.”

The comments – part of a 6,800-word August cover story on the prime minister – sparked immediate reaction. “So ‘privileged white guy beats up Indian’ was the ‘right kind of narrative?’ Seriously?” wrote one person on Twitter, while another noted: “White guy in power & entitlement looks 4 an #Indigenous human to beat up so he looks like a strong white dude. How precious & colonial supreme.”

Others pointed to Trudeau’s much vaunted commitments to diversity and tackling the deep-rooted inequities facing many indigenous peoples in Canada. “What is up @JustinTrudeau after all your talk of inclusion you brag about beating up a guy with the issues you swore to address,” tweeted one.

Okay Cap'n Cuddly you stepped in it this time. They don't know that there's less to you than meets the eye. Why not just leave it that way?
Posted by The Mound of Sound at 7:32 AM

It worked for Trudeau. A bigger , stronger martial arts/military trained guy failed to intimidate him. People , including Ezra, stopped seeing Trudeau as a lightweight.


Well he allowed it to bounce back, Rumley.

That quote to Rolling Stone was a truly dumb slip. The stunt had worked up to now. Why ruin it? One is left with an impression of arrogance that just might stick over time.

.. I expect Trudeau regrets those comments..
Unless one has been 'in the ring' for even a couple of rounds, its hard to comprehend the gut wrenching feeling as your wind goes away. Its akin to temporary suffocation with your mouth stuffed full of cotton batten. Even Trudeau admits he was on the edge of surrender & the video is clear. Its easy to see. I often remind people that I have seen another video of a Trudeau charity match.. and he was sandbagged & blindsided, absolutely taken to the woodshed. Vicious lesson applied by an aged pro boxer. Head snapping jabs, hooks. Just nasty uncalled for meanness for a guy who was clearly a Harper fan. Trudeau took it like a man.. but man he did not like it ! And I would bet Trudeau aint forgotten that whuppin or the mean spirit behind it.