They know what they're asking. That's why they're openly calling for "radical" change in the way we're organized - socially, economically, industrially, geopolitically.

The biggest consumers on the planet are North Americans. Per capita we consume the most energy, the most minerals, pretty much the most everything. We set the bar for peak middle class aspirations.

The US population now approximates about 325 million. China and India are in the 1.3+ billion range. Both of those emerging economic superpowers host a rapidly expanding "consumer class." There's your problem.

It was presented in a 2010 OECD working paper by Dr Homi Kharas, now co-director in the Global Economy and Development program at the Brookings Institution. His prediction was that by 2030 Europe would add only 16 million to its middle class. Small stuff, and North America's middle class was set to shrink by 16 million. In this context, 850 million more middle-class Chinese dominate world economic prospects. That means the Chinese middle class will grow from 12 per cent of its population in 2009 to 73 per cent in 2030. By middle class, Kharas means household income equivalent to between $US16,000 ($20,254) and $US160,000 per year, a widely used definition.

...Kharas has released a new report, this one for Brookings. He has had access to more accurate data. For that first survey, China had provided price data for only 11 cities or provinces. The latest was able to cover all provinces. This has enabled a more accurate mapping of the middle-class explosion.

Kharas has, however, updated one essential: the spending of this expanded middle class is already much greater than in his original study.

Kharas says that in North America and Europe, the middle class is being "squeezed between two ends, growing even slower than overall population growth. Some households are falling below the middle-class threshold, while others are escaping and becoming rich".

Kharas said: "The change in China's global market share of income as a percentage of the world's economy is happening much faster than it did for any country ever – faster than the UK in the industrial revolution, than the US in the 1920s, than Japan in the 1950s. When you add the disruption of China to that of India you are looking at change six to 10 times faster than these other historic transformations."


Which brings us to "Overshoot." Earth Overshoot Day 2017 falls on next Wednesday, August 2nd. That marks the day by which it is reckoned that mankind uses up a full year's supply of our planet's natural resources. From that date to the end of the year we're consuming our environmental reserves, "eating our seed corn." To add a bit of perspective, in 2006, overshoot occurred on October 9th. It has crept up, year by year, a few days at a time.

This diagram illustrates our problem: 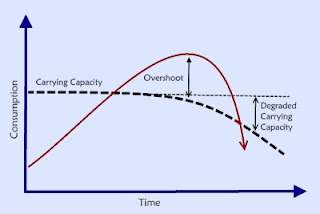 This is not hypothetical. It is visible to the naked eye from the International Space Station viewing port. It can be seen in desertification (dust plumes rising over China and crossing the Pacific), deforestation, rivers that no longer run to the sea, dry lakebeds, and algae blooms in our rivers and lakes and along our coasts. It is evident in the collapse of global fish stocks as the industrial fleet savages our oceans, fishing down the food chain. At the same time, climate change impacts such as sea level rise, severe storm events, heatwaves, droughts and floods begin to take their toll. These things are palpable, tangible, easily measured. They're undeniable and they're worsening.

I did a couple of online courses in global food security a while back. Part of the assigned reading was a chapter in a report written by three leading Chinese economists. It was so fascinating I had to read the whole paper. They foresaw the same growth dynamics mentioned by Brookings' Dr. Kharas. Yet they carried the issue a little further to address the planet's finite and declining resource base. They accepted that China would see a rapid expansion of what's now called its "consumer class" that would be thwarted by resource shortages. Their conclusion was that Communist China would have to develop a clear class structure, the 'haves' and the 'have nots.' Those who were most essential to the state would have to be rewarded with something akin to a North American standard of living. They envisioned this group as an island of affluence floating on a sea of poverty. They also foresaw great social upheaval that would have to be forcefully suppressed by the central government.

China has a lot of people but it doesn't have adequate clean freshwater reserves. It is dependent on imports of food, energy and other resources. The economists focused on China's burgeoning market for cars in the context of how much freshwater is required to produce a set of tires or build a car. Who is going to have to forego water for drinking, cooking or sanitation to meet the factory's needs?

This poses a serious future predicament for countries like Canada. Do we revert to hewers of wood and drawers of water for a foreign market, essentially an economic colony of an already resource destabilized China? Or do we recognize that our resources are strategic and vital to our own populace, essential to maintaining our own social cohesion and resilience? That recognizes a value much greater than market price. Yet this is where the world is going and there's no way to stop it.

This is our children's and our grandchildren's world. We had better figure this out and soon.

Think about this. Think about this burgeoning 'consumer class' coming out of China and, to a lesser extent, India.  Keep that in mind the next time you hear a politician spout rubbish about growth. That growth pitch is their admission of betrayal.

Anyong....There is still hope my friend. On CBC Calgary this morning a rancher living outside of Lethbridge was asked what the weather was like there. The rancher replied, "I have never ever seen it like this and I have been ranching for a long time. I have very little water left for my cows. I am beginning to be believe Climate Change is true."

We'll all be converts, Anyong, but not until it's too late. China and India are not going to depopulate. Africa is going to have their population explosion. We in the developed world would rather see the peoples of Asia and Africa die in the streets than sacrifice our comfort and ease. It's the perfect foundation for world war.

And then there's the "positive fertility response" incentives factor:

"China is considering introducing birth rewards and subsidies to encourage people to have a second child, after surveys showed that economic constraints were making many reluctant to expand families, the state-owned China Daily newspaper reported. ...

"Nextbigfuture has predicted for several years that China will end up removing all child birth limitations and flip to incentives and child friendly policies. China will need to do this to recover total workforce levels around 2040-2050 and to not lose to much working age population.

"China’s birth rate, one of the world’s lowest, is fast becoming a worry for authorities, rather than the achievement it was considered at a time when the government feared over-population."