Book Review - "Arts of Living On a Damaged Planet." 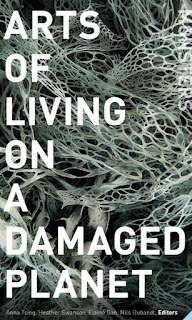 Somebody was bound to get around to this sooner or later. It's a legitimate question - what will it take to get by on the planet we have so extensively and probably permanently changed?

Think of "The Hitchhiker's Guide to the Galaxy" only it's for everybody interested in a guide to Earth, not as we've known it but as we've made it.

There is no shortage of books foretelling the catastrophe to which climate change shall deliver us. But what about a perfectly decent field guide to the flora and fauna of rising seas and ruined forests?

Into this vacuum comes Arts of Living on a Damaged Planet, a volume packed thick with descriptive essays of life in the Anthropocene — the emergent word to describe our own era, in which human hands have reshaped the planet’s environment and climate. Penned by a motley mix of mycologists, lemur biologists, sci-fi writers, anthropologists, and zoologists among others, these 18 pieces jaunt across the world, trying to make sense of plants and animals interacting with each other in a polluted landscape.
Posted by The Mound of Sound at 10:38 AM

.. gracias senor.. ! Hope its not too depressing..

But if it is.. maybe copies can be sent to elected public servant MP Peter Kent & former MPs Joe Oliver & Keith Ashfield for their brave collusion with Stevie/Ray Harper/Novak Inc during their ten year war on Canada's environment, species, habitat & any advocates, biologists, scientists & librarians


Well, Sal, I won't be buying a copy as I don't have any expectation of being around when those Arts of Living will be needed. I might get one for the kids but they wouldn't thank me for it. Maybe they'll get their own, who knows?