Donald Trump Is A.. (Your Word Here) 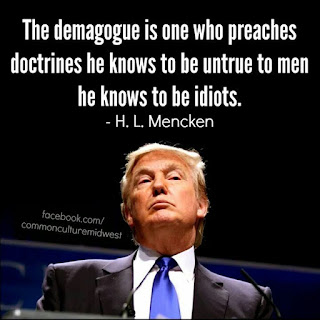 My word for this depraved, degenerate is "asshole."

Donald Trump is an asshole, maybe the biggest asshole of the 21st century. The Republican Party, that supports and empowers Trump, is a party of assholes. Those Americans who resolutely back Trump no matter how many hollow promises he fed them, no matter his degeneracy, no matter his endless outrages, well, they're assholes too.

Most Americans are not assholes. Most Americans do not think highly of their Degenerate in Chief. Most Americans yearn for the day when their national disgrace, their nightmare will be over. When you begin to lose faith in America, remember those Americans and not just the assholes.
Posted by The Mound of Sound at 10:39 AM

I don't know, Mound, but it now seems like the American Civil War was not resolved properly. They should have just created 2 separate countries: North and South. That way they could have carried out their interminable wars with one another and left the rest of the world alone.

This is definitely our last year of spending a couple of months down there -- my husband's first name is very French, but most Americans think its Mexican. Maybe we won't even get past the border at Peace Arch!!!

Lulymay, check your library for a copy of Chuck Thompson's, "Better Off Without'Em." It's a tongue in cheek look at the Divided States of America. The author makes the case that both sides would be happier amicably separated.

Once again I recommend "American War".

Anyong....Can't remember when he said this but I remember hearing it broadcast from the BBC one evening.Trump said, "the worse thing America ever did was give Canada its independence". It is an amazing thing how money can buy stupidity.

Regarding the American Civil War, the only problem with leaving it two separate countries is that it dooms several more generations of African Americans to even shittier lives than they’ve managed since, and probably most of the white trash population of the south as well. Mostly self-inflicted in the latter’s case, but still.

My thoughts are more that the North didn’t cement their victory properly by hanging a good proportion of the traitors who rose up to defend slavery, followed by a proper seizure and distribution of the plantation lands to the former slaves (forty acres and a mule for real). That’s an alternative timeline I’d like to see someone to make into a TV series rather than another “What if the South had won?” wankfest.

BJB- I think there's a spin off Game of Thrones show that's going to based on the Civil War.

Not a Game of Thrones spin-off, but made by the same folks running Game of Thrones. Called "Confederate", and premised on the South not losing the war and maintaining slavery to the present day. Basically, just another of the "What if the South had won?" genre. I want a "What if the North had really went total war on the traitor's asses and treated the KKK and its supporters like the terrorist organization/insurgency it was?" story.

I don't know whether the BBC repeated it or was reporting in reference to another source, but a similar and fake Trump comment about giving Canada its independence originated on a satirical website: