Sometimes a Picture Says So Much. 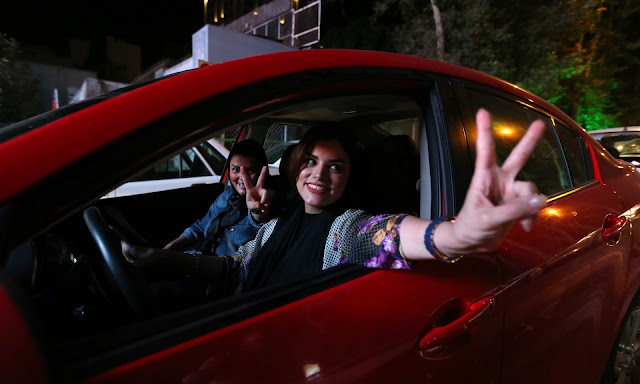 What does this photograph convey? A couple of attractive women in a newish car. Nice clothes and makeup. Pretty happy about something.

Here's the thing. They're Iranian. In Iran. No hijabs, nothing of the sort.

Clashes between women and Iran’s morality police particularly increase in the summer when temperatures rise. But even though the police regularly stop these drivers, fining them or even temporarily seizing their vehicle, such acts of resistance have continued, infuriating hardliners over a long-standing policy they have had a great deal of difficulty enforcing.

Iran’s moderate president, Hassan Rouhani, has argued that people’s private space should be respected and opposes a crackdown on women who don’t wear the hijab. He said explicitly that the police’s job is not to administer Islam. Speaking in 2015, Rouhani said: “The police can’t do something and say I’m doing this because God said so. That’s not a police [officer]’s business.”

But Iran is supposedly an evil empire, our mortal enemy. We've taken sides and Iran's rival, Saudi Arabia, is our ally. Because, after all, Shiite Iran is a state sponsor of terrorism. Just look - the embassy bombings; the attack on USS Cole; the 9/11 attacks on the World Trade Center and the Pentagon; the Taliban, al Qaeda, al Nusra, ISIS, Boko Haram; you can't ignore that sort of reality. What? Those had nothing to do with Shiite Iran? They're the handiwork of the radical Sunni faith, Wahhabism, of Saudi Arabia that the Saudis and other Gulf States have funded, promoted and spread. So we're on the side of the guys who have set that part of the world on fire with murderous Sunni fundamentalism and spread terrorism into our own capitals but we're opposed to the other guys, the Iranians. Something doesn't seem quite right here. Can you figure it out?

And please do let me know the next time you see two Saudi women, turned out as nicely as these women, driving a car on the streets of Riyadh.

I have *never* understood how it got so backward.

At yet , half way around the world!

Geez, Mound, you forgot to mention Israel as a primary Iranian enemy. Hop on board the Trudeau Train :)

I didn't forget, Anon. I omitted it to avoid cluttering the Iran/Saudi contrast.