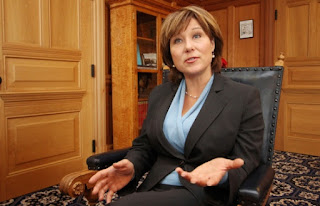 It's time to drain the swamp now that Christy Clark and the BC Liberals have been ousted from power. Only unlike what Trump meant by the term, basically nothing, British Columbians need Christy's bog drained to see what lurks on the bottom.

Not for nothing did The New York Times call Clark's British Columbia the "Wild West of Canadian Political Cash."  What many would consider outright influence peddling was standard fare for the BC Libs.

Christy Clark rounded out her final days in office with a parting gift — not to British Columbians but to a loyal BC Liberal donor, Taseko Mines. The company donated more than $130,000 to the BC Liberals, and now they’ve scooped up Clark’s prize.

While members of the Tsilhqot'in First Nation were being chased from their homes by an aggressive wildfire, Clark’s outgoing government approved exploratory permits for the company to dig up their traditional, and constitutionally protected, lands — an area so culturally and environmentally important that Harper’s Conservatives rejected federal permits twice.

But then again, the federal Conservative party can’t accept corporate donations. Over here in the “Wild West,” Clark’s BC Liberals can, and did.
...

Too many decisions — potentially made under the influence of Big Money — will still stand, even after we ban Big Money.

Remember Mount Polley? The mining company whose tailing pond breach became the biggest environmental disaster in B.C.’s history? Imperial Metals has given more than $213,760 to the BC Liberals, $54,220 of which came from its subsidiary Mount Polley Mining.

B.C.’s Ministry of Environment knew about risks the tailing pond posed and issued five warnings to the company, but took no punitive action when warnings were ignored. Meanwhile, Christy Clark and BC Liberals ministers were flying to Calgary for a $1-million fundraiser hosted by Imperial Metals’ controlling shareholder Murray Edwards.

The mine was allowed to reopen two years after the disaster with no fines or criminal charges, and taxpayers are on the hook for cleanup costs.

To top it all off, the company is now allowed to dump waste directly into Quesnel Lake, where residents of Likely B.C. get their drinking water.
...

When you start to see all of the political decisions that have been made to the benefit of Big Money donors and the detriment of British Columbians, it is really alarming. Texas-based Kinder Morgan’s unpopular pipeline approval in B.C., U.S. trophy hunting Super PACs’ pressure to influence over wildlife management, a Malaysian and Chinese state-owned LNG terminal built on top of a salmon spawning ground, a lobbyist turned government-appointed chair turned board member of a Las Vegas casino that landed a prime location next to B.C. Place, even the unresolved BC Rail sale… every corner of this province, every sector of industry, has an example to look at.

Now there's a swamp that really is overdue for a draining.

I've been thinking for a while that under it all, the main real reason Christy refused to resign and sat in the office and postured right down to the bitter end when Horgan was sworn in (honestly, I half thought she'd barricade herself in and they'd have to get a SWAT team to drag her out) is that the Libs were desperately buying every minute of time they could to shred documents and scrub computers.

I expect Horgan's crew will find no end of freshly emptied file folders. They're going to have to recreate the Liberal government forensically. It's not going to be easy and time isn't on their side. They've got to get the goods on Clark, or at least a big chunk of it, while Horgan's government remains intact.

You may have seen this: