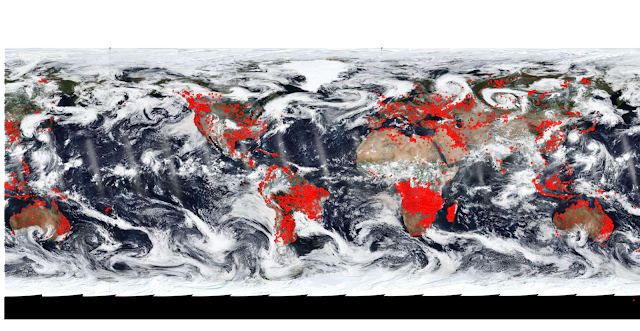 In this photo, the red dots designate points on the planet where NASA's thermal bands have detected actively burning fires. In Africa, says NASA, where the majority of the world fires appear to be burning, a vast number of these are most likely strategically set agricultural fires, designed to manage land and return nutrients to the soil.

However a large number represent out of control wildfires. Particularly in North America and Chile.

The fires in Australia are bushfires, which tend to be common during dry seasons, but Australia is currently in the middle of winter (and a drought). "As the climate continues to change," said NASA in a post, "and areas become hotter and drier, more and more extreme bushfires will break out across the entire Australian continent."