"Power, Money and Political Will" 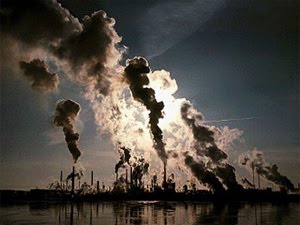 "Solving climate change is about power, money, and political will."

That's how Simon Lewis, professor of global change science at University College London, imagines we might sort out climate change before it morphs into runaway climate change. It's just a matter of marshaling scads of power, money and political will.

...we face the same three choices in response to climate change as we did before this scorching summer: reduce greenhouse gas emissions (mitigation), make changes to reduce the adverse impacts of the new conditions we create (adaptation), or suffer the consequences of what we fail to mitigate or adapt to. It is useful to come back to these three options, and settle on the formula that serious mitigation and wise adaptation means little suffering.

Despite this basic advice being decades old, we are heading for some mitigation, very little adaptation, and a lot of suffering. Why is this happening? This is because while the diagnosis of climate change being a problem is a scientific issue, the response to it is not. Leaving fossil fuels in the ground is, for example, a question of regulation, while investing in renewable energy is a policy choice, and modernising our housing stock to make it energy efficient is about overcoming the lobbying power of the building industry.

...The world, after 30 years of warnings, has barely got to grips with reducing carbon dioxide emissions. They need to rapidly decline to zero, but after decades of increases, are, at best, flatlining, with investments in extracting new fossil fuels continuing, including last month’s scandalous announcement that fracking will be allowed in the UK. Temperatures have increased just 1C above preindustrial levels, and we are on course for another 2C or 3C on top of that. Could civilisation weather this level of warming?

The honest answer is nobody knows. Dystopia is easy to envisage: for example, Europe is not coping well with even modest numbers of migrants, and future flows look likely to increase substantially as migration itself is an adaptation to rapid climate change. How will the cooler, richer parts of the world react to tens of millions of people escaping the hotter, poorer parts? Throw into the mix long-term stagnating incomes for most people across the west and climate-induced crop failures causing massive food price spikes and we have a recipe for widespread unrest that could overload political institutions.

Professor Lewis is right, of course. We could do it. We can do it. We can sort out, at least somewhat, all of the perils arising out of mankind's refusal to live within the very finite ecological limits of planet Earth.

Our species can resolve our overpopulation problem, get our numbers back down to something in the range of two billion. The thorny question is how. There are a few ways we can do that, some significantly less palatable than others.

We can massively curb our rapacious over-consumption of the Earth's resources which we're currently exceeding by a factor of 1.7. That would mean cutting our consumption by - face it, a lot. And the burden of those cuts would have to fall on the major consumers - the developed nations, us. The "have nots" need a good deal more so the "haves" would have to give up half, perhaps more, of their resource consumption.  Besides, if we found a way to shrink our overall numbers by two-thirds, some of that sacrifice would be eased.

That leaves climate change. We can do that. We can leave fossil resources such as coal and bitumen in the ground. We can electrify most of our economies and can even produce transport fuels from the surface carbon cycle, displacing fossil energy. We can do these things. Only we still see fossil carbon as wealth. It is said there are proven reserves valued at $27 trillion already subscribed on the stock markets and bourses of our world. Blowing that up is a prospect that sends shivers up the spines of what passes for political leadership today.

Professor Lewis nails it when he says that the answer lies in "cooperative internationalism."


...without cooperative internationalism serious carbon dioxide mitigation will not happen, meaning the underling drivers of the problems will exacerbate, leading to a lock-in of a deteriorating, isolationist, fascist future.

The problem is that the nations of the world are not on the same page. We don't experience this three-headed monster the same way which means that each nation brings an agenda shaped by its own situation. And, given that the solutions to this existential triad are based in equitable approaches, a levening, the most advantaged and powerful nations see these ideas as global Marxism - the old "from each according to his ability, to each according to his need" business. That's a tough sell in this age of corporate democracy.  There may be a few apple carts to tip before we get there.

We are already in run away Climate Change.

We can, Mound. But we keep coming up with excuses for why we won't.