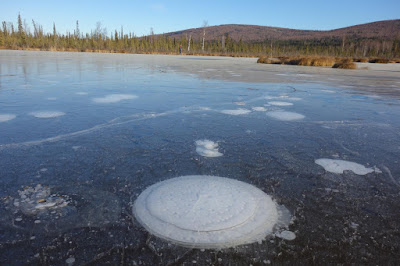 A new phenomenon has been detected in the far north - "abrupt thawing." NASA warns it could trigger an acceleration in the release of methane once safely sequestered in the permafrost.

New NASA-funded research has discovered that Arctic permafrost's expected gradual thawing and the associated release of greenhouse gases to the atmosphere may actually be sped up by instances of a relatively little known process called abrupt thawing. Abrupt thawing takes place under a certain type of Arctic lake, known as a thermokarst lake that forms as permafrost thaws.

The impact on the climate may mean an influx of permafrost-derived methane into the atmosphere in the mid-21st century, which is not currently accounted for in climate projections.

The Arctic landscape stores one of the largest natural reservoirs of organic carbon in the world in its frozen soils. But once thawed, soil microbes in the permafrost can turn that carbon into the greenhouse gases carbon dioxide and methane, which then enter into the atmosphere and contribute to climate warming.

"The mechanism of abrupt thaw and thermokarst lake formation matters a lot for the permafrost-carbon feedback this century," said first author Katey Walter Anthony at the University of Alaska, Fairbanks, who led the project that was part of NASA's Arctic-Boreal Vulnerability Experiment (ABoVE), a ten-year program to understand climate change effects on the Arctic. "We don't have to wait 200 or 300 years to get these large releases of permafrost carbon. Within my lifetime, my children's lifetime, it should be ramping up. It's already happening but it's not happening at a really fast rate right now, but within a few decades, it should peak."

If nothing else, this catastrophic work in progress is increasing our lexicon to include phrases such as positive feedback loops and tipping points, flash drought, wet bulb 35 and, now, abrupt thawing. And, unlike a lot of the stuff you learned in school, you won't be forgetting these because they're with you for good. They're part of your life and your kids' lives and your grandkids'.

The photo shows a thermakarst lake. The white areas beneath the ice are methane bubbles that form from the melting lakebed and, on breakup, will be added to the atmosphere.