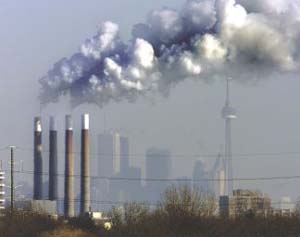 It's well known that breathing heavily polluted air can exact a toll on respiratory and cardiological health.  Now it turns out it can also make you a fair bit dumber.


Air pollution causes a “huge” reduction in intelligence, according to new research, indicating that the damage to society of toxic air is far deeper than the well-known impacts on physical health.

The research was conducted in China but is relevant across the world, with 95% of the global population breathing unsafe air. It found that high pollution levels led to significant drops in test scores in language and arithmetic, with the average impact equivalent to having lost a year of the person’s education.

Air pollution causes seven million premature deaths a year but the harm to people’s mental abilities is less well known. A recent study found toxic air was linked to “extremely high mortality” in people with mental disordersand earlier work linked it to increased mental illness in children, while another analysis found those living near busy roads had an increased risk of dementia.

...Derrick Ho, at the Hong Kong Polytechnic University, said the impact of air pollution on cognition was important and his group had similar preliminary findings in their work. “It is because high air pollution can potentially be associated with oxidative stress, neuroinflammation, and neurodegeneration of humans,” he said.

Chen said air pollution was most likely to be the cause of the loss of intelligence, rather than simply being a correlation. The study followed the same individuals as air pollution varied from one year to the next, meaning that many other possible causal factors such as genetic differences are automatically accounted for.

Yes....I heard this last night on Radio Australia. It makes sense since polluted air affects the lungs affecting in turn the brain. While living in China, I had been advised to leave due to difficulty breathing. I took the advise and was happy to get out of it. However, it hasn't been a "breath of fresh air" in Alberta since the B.C. fires. Not many people seem o mind though. Anyong