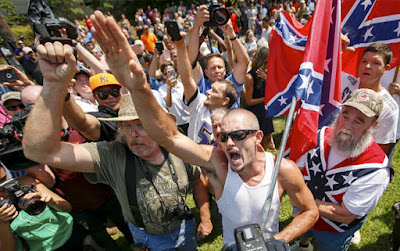 Two things - Trump supporters include a significant number of absolute nutters. You have to be a bit unhinged to believe his constant lies. And Trump doesn't hesitate to inflame the lunatics who back him, even inciting them to violence.

So it shouldn't come as a surprise when one of Trump's Gullibillies takes matters into his own hands.


A man has been arrested and charged with threatening to kill employees of the Boston Globe newspaper, in messages repeating Donald Trump’s claims that journalists are the “enemy of the people” and “fake news”.

Robert Chain called the Globe’s newsroom and claimed he would shoot staff members in the head, according to the FBI, which said Chain later specified that he was retaliating against the newspaper’s criticism of Trump’s attacks on the news media.

Chain, of Encino, California, owns several firearms and was found to have purchased a new 9mm carbine rifle in May this year, according to US authorities.

Mr. Chain is, if nothing else, a domestic terrorist and he comes from the ranks of a gaggle of like-minded, fear-stoked, racist people fed a rich diet of vitriol by their pathetic excuse of a president. There's one thing Hillary had right - they're deplorable.

In other words, they're neo-Confederates (see flags in photo). Don't ask me how they wound up being led by a Yankee.

Fifteen Ways the Democrats Can Lose the November Elections