Has the US Government Become a Criminal Enterprise?

There's a lot of talk today that the Republican-controlled Senate is willing to collaborate with Trump, allowing him to fire AG Sessions and appoint a replacement specifically for the purpose of sabotaging the Mueller investigation into the criminal enterprise known as the Trump White House. This would, in effect, transform the Senate into a criminal enterprise unto itself. The House of Representatives has held that dubious honour since the orange stain was sworn into office.

If Senate Republicans do Trump's bidding, that's the effective end of the Rule of Law in America and the demise of the American Constitution. After that it's all Alibaba and the 40 Thieves. 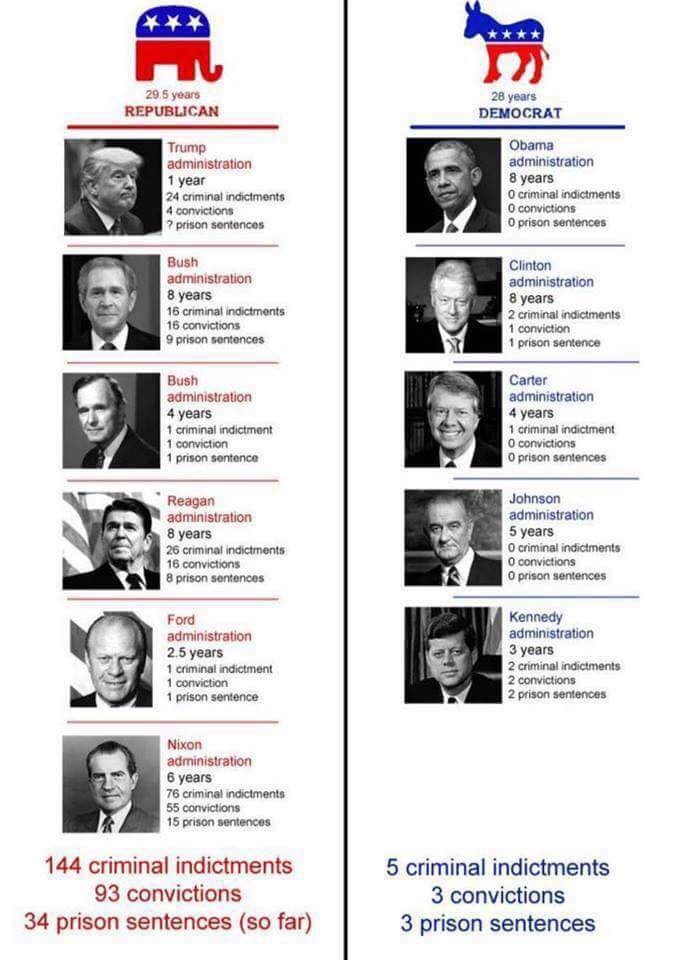 We can only hope that Mueller is ready with a pre-emptive strike should Trump toss Sessions. He's going to have to be prepared to spill everything his investigation has uncovered about Trump, his aides, Trump's congressional collaborators and the kids - Don Jr., Eric, Ivanka and Kushner.
Posted by The Mound of Sound at 4:13 PM

The Georgia voter supression campaign is being run out of the DOJ and is being enacted all across the US.

The program of Ethnic Cleansing and Concentration Camps is only possible because Sessions appoints the Immigration Judges and has given orders that they conduct Show Trials.

Sessions is critical to turning the US into a Nazi state.

That has to be one of the stupidest graphics I have ever seen. Tell the relatives of the tens of thousands of innocent civilians massacred by Obama's drones and bombs that he ran an administration "free of crime," or the parents of the half-million Iraqi children starved to death by Clinton's economic sanctions.

The American government has been a "criminal enterprise" going back to the slaughter of several million North Korean civilians by Harry Truman in the early 50s. Trump is just the latest Godfather, albeit not very good at it.

A really sobering view of the sorry state of USA politics. Unless the Republicans lead the impeachment process (ya, right) it will only make tRump stronger.

Why Convictions Will Not Alter Trump’s Reality

"....... It’s apparent that no matter what future convictions may uncover, Trump will fight their revelations as phony and accuse Mueller of being out to get him. The enemy for him will continue to be the corrupt Democrats, and the fake news media, with the exception of Fox News. It’s not altogether a weak strategy, up until the Cohen and Manafort convictions, Trump’s constant attacks on Mueller’s investigation has lead to less than half of the public supporting it and two-thirds wanting it to end before the November elections.

Trump’s insistence that reality conform to his perception, leads to the inevitable conclusion that even if the Democrats somehow won the House and impeach Trump, he would most likely conclude before any final vote was taken in the Senate, that Congress was rigged against him. He made a similar remark of the entire election process when as a candidate he was behind in the polls and it looked like he might lose.

Despite being a pugnacious fighter, who enjoys taunting his opponents, he has another characteristic, which rallies his core supporters. He is a victim of The Deep State, the ever-present demon of the far-right, which secretly manipulates our nation’s future. Numerous polls indicate that it’s a belief that may be shared by up to a third of the nation.

If Trump feels he can no longer tolerate the conspiracy of his enemies to oust him, he may well ignore the decisions of our democratic institutions and appeal to his core supporters to save our constitution from the evil deep state. That crisis may just force Republicans in Congress to publicly object to his inability and disinterest in maintaining our democracy. If they don’t, then the foundations of our democratic society will have shifted off of their institutional base to one dependent on the beliefs and whims of whoever is “the leader”. "
https://www.counterpunch.org/2018/08/24/why-convictions-will-not-alter-trumps-reality/


NPoV, it's emerging that the American people are not particularly inclined to defend democracy or their vaunted Constitution. To what extent this indifference is a groomed response (something I've been suggesting for years) is not clear, perhaps not even material. The malaise is the problem and it seems pretty well entrenched among the American people today.

Karl doesn't remember any of the Bushes, which is kinda funny, you know, Iraq wars n'stuff.

I'm thinking the Night Stalker account is a bot.

Bernie Bro "nym" and "voice" created in 2016 to troll, hasn't managed to adapt as the world changes.

For those not up on their TV trivia the Night Stalker was Karl Kolchak.

.. its fascinating to look far down the road, Mound ..
the Trump failure, the posing & posturing, recused Sessions
the horse shite salad (hold the lettuce & tomato thanks)
its all MAGA, country clubs & golf carts..
Giuliani on one in Scotland.. he got there how ? Why ?

Dead children on a beach in Palestine..
or washed up on shore of Tripoli or Italy or Algeria
Towers collapsing, Kent State, Oklahoma City
Las Vegas and the what ? 59 some dead, 250 wounded ?

Alex Jones.. and 'crisis actors' The dead of Sandy Hook
the dead of Parkland.. insult the dead, the wounded, the survivors
its all in play its all OK - Crooked Hillary, the emails
This pipeline will be built.. Site C 'point of no return'

I think you and I.. and your Indy posse
lived through all this.. JFK Zapruder, I was Grade 5
Robert on the floor, Martin Luther King slain
Cuban Crisis, Kruscheve bangin his shoe
African warlords, collapsing Antarctic icefields
collapsing Maritime fisheries,

All things become 'codified' - time grinds
like water upon rock.. the iconic images
become the 'story' - Trump junior
with an elephant tail and knife, triumphant ..
Malibu beaches & homes washing into the Pacific
Vancouver Island, interior BC and Alberta on fire

But Andrew Scheer and the Harper Rump Remnants
are ready for Canada eh.. !
And live streamed 30 minutes of empty podium
to ensure Candians got the message..
Nobody home, nobody 'ready'
.. but 'Friend, send twenty $'
so we can help Doug Ford and his personal agenda
rewrite school curriculum cuz of those LGBT kids
who want to use bathrooms at school..

Obviously these deep thinkers
never used a Tim Horton's or public library washroom
You know, tne one with a wheelchair, female in skirt
or male icon in pants.. or dangerous 12 year old
with odd nail polish.. and lotsa eyeblack ..
and frightening tatoos..
Hell ! They might be Goth ! The horror !

We're all old enough to look behind the mirror, Mound
We are what you might say... 'experienced'
Been there, done it, got the t-shirt.. hell, got the tatoo

fyi - my son got hitched last weekend
to a lovely young woman of Peruvian descent
and in attendance were representatives of ..
a loose peer group of some 4-5 hundred

There were Federal MP's - nuclear operators
lawyers, MD's, gadabouts, teachers, mechanics
and out of that crowd.. not a whiff
of a conservstive or Trump belieber
Those 'kids' are not automatic voters in any way
and I like that.. !
economists, musicians, students, artists
the entire Canadian spectrum among the gathering
in a forest chapel.. no religion ever expressed
a blue jay tood a free shot.. as did a murder of crows overhead

I saw some of the future there, Mound
the MP will not be 'whipped' by Trudeau
he has a thing about representing his riding
and nobody aside from the graybeards
was over 33 years old.. it gives me hope

"Has the US Government Become a Criminal Enterprise?" It has been that for a very long time. Anyong.