Here's Something Justin Trudeau Can Do 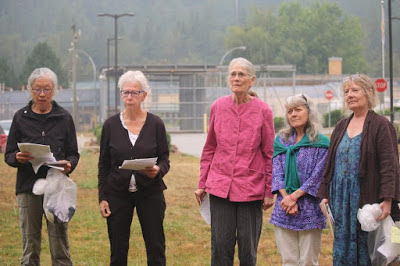 Our prime minister never hesitates to apologize for the sins of past Canadian governments. Maybe he should take a page out of his own book to redress his own sins.

He can start by doing whatever is necessary to expunge the criminal records of those brave protesters who stood up to his sham pipeline project and were jailed for their defying his lies and abuse in order that they might somehow defend our coast.

Today's unanimous decision of the Federal Court of Appeal morally exonerates their supposed trespass of the Kinder Morgan terminal in Burnaby.

Trudeau cannot claim he acted in good faith because there is no good faith in lies and his pipeline venture stands on a foundation of falsehoods.

He can turn on the waterworks for the long past sins of others. This time the wrongdoing is entirely his own.
Posted by The Mound of Sound at 11:36 AM

On this one Mound I entirely agree with you. It will be 'interesting' to see how the proposed purchase of KM assets by 'Canadians' goes from here ..... AND how the Alberta oil barons both private and public respond...!

He could pay the $10M cancellation fee and get out of this silly deal altogether.

Meanwhile that idiot Morneau is carrying on and mouthing inanities as if nothing happened. He's divorced from reality. What is the Liberal brains trust going to do? Start a civil war by pretending the ruling didn't happen?

The "business" squawking is wonderful to behold. Maybe Alberta can wake up now and stop showing ridiculous commercials here touting KMX lies like "The volume won't increase but we'll get paid more for it and build shiny new hospitals for everyone". Nobody will invest in Canada again, shout the bought-and-paid-for Postmedia outlets, institutes funded by Koch and other anti-public money-grubbing entities.

The talking heads are at it on Global TV now, all pro-"business" bozos. At the fundamental core of it all lies Harper. Who else? Who stacked the NEB in the first place and sent Joe Oliver, dunderhead-at-large and described as harper's "secret weapon" by MacLeans to insult environmentalists? Now Scheer is trying to brave it all out. Squawk, splutter, whinge, expostulate horse manure. I hope Kenney has a sleepless night.

That incompetent Freeland will probably screw up NAFTA as well - the Libs want that ISDS chapter as if it were fundamental. God knows why, must be lack of basic intellect.

Voting is exercising our right to be deluded and defrauded.

Before Andrew Weaver became leader of the B.C. Greens, when he was a University of Victoria climate scientist, he crunched the numbers and found that burning all of Alberta’s oil sands “would be almost undetectable” on a global scale. But, you know, wail away fill your boots with your moral indignation.