It's Enough to Make Your Head Spin. 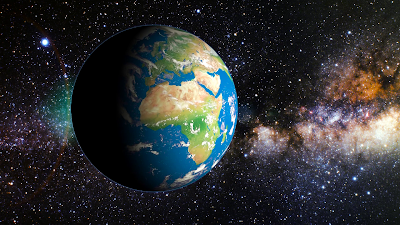 We think of ourselves as a somewhat sedentary bunch. There are some who might jog 5 or 10 kms. a day, that sort of thing but we generally don't propel ourselves very far.

Or so you might think.  A couple of years ago I set out to calculate how fast we're really moving, even couch potatoes.

Without even getting off the couch, the rotation of our planet has you going pretty fast. At the equator it's just over a thousand miles an hour. Every hour, every day.

Our Earth also orbits the sun. Our orbital speed is about 67,000 miles per hour.

Our solar system is on a huge orbit around the Milky Way taking some 230 million years to complete one circuit. That adds 448,000 miles per hour to your travel speed.

The real kicker, however, is the speed our galaxy, the Milky Way, is travelling across the universe. That bumps up our speed by 1.3 million miles per hour.

So, don't hesitate. You're entitled to that beer. You earned it. The good news is that the liquor store is going just as fast as you are, relatively speaking.
Posted by The Mound of Sound at 1:08 PM

Yes but; I hope there's intilegent life in space , cause there's bugger all here on earth

Well done....
You just nailed the reason why time travel is unlikely to become reality,
The distance between today and yesterday (let alone 100 year ago) is vast.

Mound, you have a notorious scammer posting on several of your threads. "Dr Purva Pius" is a well known fraudster.