"When You See Me, Cry" - Europe's Hunger Stones Emerge 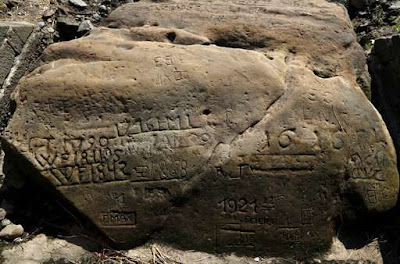 This year's drought in central Europe has exposed stones in the Elbe River bed inscribed with ominous warnings.


The low water levels in the river that begins in the Czech Republic then crosses Germany into the North Sea has exposed stones on the river bed whose appearances in history used to warn people that hard times were coming.

Over a dozen of the hunger stones, chosen to record low water levels, can now be seen in and near the northern Czech town of Decin near the German border.

The oldest water mark visible dates to 1616. That stone, is considered the oldest hydrological landmark in Central Europe, bears a chiseled inscription in German that says: "When you see me, cry."

The Elbe isn't the only European river at record low levels. The Danube, used for river cruises and cargo transportation, is at record lows in three areas near Budapest impeding navigation.

Meanwhile the combination of heatwaves and extreme drought has sharply impacted European agricultural production that may result in food shortages.

This is extraordinarily ominous, Mound, and a potent symbol of the climate-change madness we have allowed to happen.

What Deutsche Welle reported last night is far worse than what is said here. Anyong