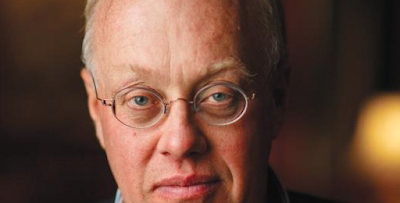 Sorry to be piling on with climate posts. Today there's been something of a tsunami of climate stories. Atop the latest pile of research papers, Chris Hedges weighs in with his farewell to Planet Earth.


The planet is transitioning under our onslaught to a new era called the Anthropocene. This era is the product of violent conquest, warfare, slavery, genocide and the Industrial Revolution, which began about 200 years ago, and saw humans start to burn a hundred million years of sunlight stored in the form of coal and petroleum. The numbers of humans climbed to over 7 billion. Air, water, ice and rock, which are interdependent, changed. Temperatures climbed. The Anthropocene, for humans and most other species, will most likely conclude with extinction or a massive die-off, as well as climate conditions that will preclude most known life forms. We engineered our march toward collective suicide although global warming was first identified in 1896 by the Swedish scientist Svante Arrhenius.

The failure to act to ameliorate global warming exposes the myth of human progress and the illusion that we are rational creatures. We ignore the wisdom of the past and the stark scientific facts before us. We are entranced by electronic hallucinations and burlesque acts, including those emanating from the centers of power, and this ensures our doom. Speak this unpleasant truth and you are condemned by much of society. The mania for hope and magical thinking is as seductive in the Industrial Age as it was in pre-modern societies.

Ate and Nemesis were minor deities who were evoked in ancient Greek drama. Those infected with hubris, the Greeks warned, lost touch with the sacred, believed they could defy fate, or fortuna, and abandoned humility and virtue. They thought of themselves as gods. Their hubris blinded them to human limits and led them to carry out acts of suicidal folly, embodied in the god Ate. This provoked the wrath of the gods. Divine retribution, in the form of Nemesis, led to tragedy and death and then restored balance and order, once those poisoned with hubris were eradicated. “Too late, too late you see the path of wisdom,” the Chorus in the play “Antigone” tells Creon, ruler of Thebes, whose family has died because of his hubris.


The theory that intelligent life is self-extinguishing.


“We’re probably not the first time there’s been a civilization in the universe,” Adam Frank, a professor of astrophysics at the University of Rochester and the author of “Light of the Stars: Alien Worlds and the Fate of the Earth,” told me when we met in New York.

...“If you develop an industrial civilization like ours, the route is going to be the same,” Adam Frank said. “You’re going to have a hard time not triggering climate change.”

...“Hundreds of millions of people in some of Earth’s most technologically advanced cities rely on the mild climate delivered by the Gulf Stream,” Frank writes in “Light of the Stars.” “But the Gulf Stream is nothing more than a particular circulation pattern formed during a particular climate state the Earth settled into after the last ice age ended. It is not a permanent fixture of the planet.”

...“Climate change is not a problem we have to make go away, in a sense that you don’t make adolescence go away,” Frank said. “It is a dangerous transition that you have to navigate. … The question is are we smart enough to deal with the effects of our own power? Climate change is not a pollution problem. It’s not like any environmental problem we’ve faced before. In some sense, it’s not an environmental problem but a planetary transition. We’ve already pushed the earth into it. We’re going to have to evolve a new way of being a civilization, fundamentally.”

“We will either evolve those group behaviors quickly or the earth will take what we’ve given it, in terms of new climate states, and move on and create new species,” he said.

Frank said the mathematical models for the future of the planet have three trajectories. One is a massive die-off of perhaps 70 percent of the human population and then an uneasy stabilization. The second is complete collapse and extinction. The third is a dramatic reconfiguration of human society to protect the biosphere and make it more diverse and productive not for human beings but for the health of the planet. This would include halting our consumption of fossil fuels, converting to a plant-based diet and dismantling the animal agriculture industry as well as greening deserts and restoring rainforests.

The question then becomes are we even willing to try to reconfigure human society to salvage the biosphere? Put it this way. People who promote high-carbon fossil fuels when they should be shutting down fossil fuels entirely are not going to save our one and only biosphere. That's mass murder in slow motion.

So, who's going to be first to give up their middle class lifestyle and go back to living in mud huts? Anyone?

I'm not mocking this post, it's just that making a statement like "all we need to do is give up fossil fuels" makes ending modern civilization as we know it sound easy. The time to act in such a way that could have saved some aspects of modern life was 50 years ago when scientists first started to recognize the problem. Now it is far too late to do anything but make peace with what's coming.

It seems noone is brave enough to tell the truth. If humans die out, the earth and most of life will continue . We are not nearly as important as we think we are.

I got married in the 45 or so years ago and refused to have kids; I had little confidence in the path the world was on. Now in my 70's I Haven't changed my mind.

Hedges' observations demonstrate why he has been called a modern prophet, Mound. Like the biblical prophets of old, he speaks truths the establishment finds unpalatable, and like many of them, his words continue to be ignored at great consequence.

With regard to Karl's comments, the absolutist choices he proffers are a favourite of those who don't want to indulge in serious discussion.

It's an old story, Mound. The Greeks understood our essential illness.

He'll be in my city next week. I look forward to the discussion that will ensue around this most pivotal issue.