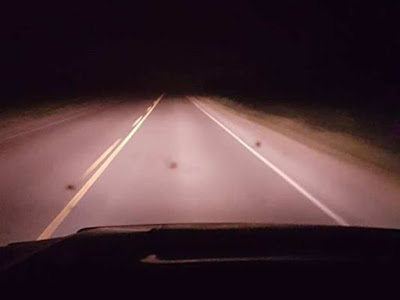 The forest fire situation has reached the point that the British Columbia government has declared a provincial state of emergency. The photo was published n the Vancouver Sun. It shows what hwy 27 was like up by Fort St. James yesterday afternoon. Darker than midnight.

By an incredible fluke this comes at the same time as work resumes on the Justin Trudeau Memorial TransMountain Pipeline. Yin and yang. Hand in glove.

Donald Trump says climate change is a hoax. Justin Trudeau only acts that way.
Posted by The Mound of Sound at 8:56 AM

It is long past time for all parties in Canada both federal and provincial to answer one question. "are you on the side of the oil companies or the people (environment) when it comes to fossil fuel use or sales".

We know where the greens and most of the so called conservative parties stand but it is time for everyone else to grow a pair and take a clear position. It is not like they can gain or lose many seats in the oil producing regions and it doesn't need to mean shutting the industry down, just making it fit Canada's needs. Hell the liberals can save some face by building the new pipeline to replace the old leaky one which will be decommissioned and removed once the new one is up and running.


The problem is, Carl, that the party faithful, Conservative and Liberal, don't see this as a "deal breaker" issue. If Trudeau mumbles "carbon pricing" the Liberal rank and file seem content with that. No one gets too deep into the problem perhaps because they know what awaits from too much digging around.