Those Saudi Bastards Have Crossed a Line This Time. 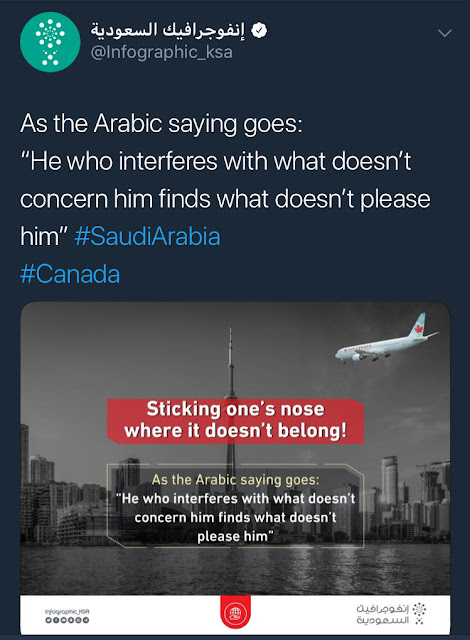 A UK-based, Arab website, alaraby.co.uk, links the group that posted this to the Saudi royal court.


A verified Saudi Twitter account curating infographics for the kingdom has kicked up a storm after posting a threatening image showing an Air Canada flight heading toward Toronto's CN Tower, as diplomatic tensions between the two countries erupted.

The account, Infographic_KSA, published an image on Monday with the heading "Sticking one's nose where it doesn't belong", along with an Arabic proverb stating "He who interferes with what doesn't concern him finds what doesn't please him".

So, a tweet is interference? That said, I guess a tweet is also a threat. Justin may have an excuse to suspend the battle wagon contract if this goes much further.

This tweet is both a confession, and a threat.

The Canadian comments were not a threat in any manner.

Trudeau should pass this Saudi infographic along to our neighbour and ally, and press Trump and congress to release the full unredacted 9/11 report. I'm pretty sure these Saudi jokesters are unwittingly telling an important truth about their country.

With power comes arrogance.
The Saudis are much like their new best friends , the Israelis.
In the end money will trump morality.

There must be more to this than what meets the eye.

I would suggest S.A. is doing a favour for Trump. We've had things to say about the S.A. "attitude" towards dissent and not have these blow back. no I think I see a very orange tiny finger in all of this.

Trudeau, his cabinet, this country are a problem for people like Trump, Putin and the Crown Prince of S.A. I find it interesting N.K. and Iran haven't had much to say about what we have to say.

Now they threaten Canada with a similar attack because we dare to ask a few questions about their pathetic human rights record.
We must explore a boycott of Saudi Arabia immediately, including but not limited to, a complete ban on sales of military hardware to this country. That's YOU General Dynamics!


I don't want to dive into the bottomless pit of conspiracy theories but it does strike me as curious that this threat is piss us off and we'll fly an Air Canada jetliner into the tallest bit of concrete we can find. There does seem something familiar to that.

Even before this threat, I see the KSA actions as an opportunity and as grounds to cancel the war wagon sale as a Force Majeure event.

It looks like Trumps has lit the exploding cigar. In his frenzy to authoritarianism he has aligned the US with Israel and Saudi Arabia ; an alliance based on bloodshed and poor economic performance.

On the other side , Trump is doing everything he ca to align China, Russia,the EU, Syria, Turkey and Iran. Looking at a map, we see that this alignment fits perfectly into the Chinese Belt and Road plan.

Own goal by Donnie.

Even without the threat, the whole Saudi reaction is so ludicrous and somewhere so far beyond hypocritical it's hard to pick up my jaw.
"Saying something not-nice about us constitutes totally unacceptable interference!!!" (unlike, say, sponsoring terrorists to try to overthrow Syria, or that thing trying to shank Qatar, or invading Yemen with death, epidemics and mass starvation . . . that's all perfectly fine, who, us interfere?)


Do you need any kind of loan if yes my contract Mr Anthony who help me with a loan just few week's back , i just need to share this round the world to let people know that there are still good heated people in the world today . I really lost money to scammers online all because i was desperate for a loan . Until i saw a comment about him , contacting him his not a mistake but a dreams come through for me . Now I'm a happy man with my family . Contact him if you need any loan at :inforamzanloan@gmail.com

DEATH TO SAUDI ARABIA. DEATH TO ALL WAHADIS. WAKE UP!!!! WE NEED TO EXTERMINATE THIS ENTIRE RACE POST HASTE.