Too Important to Let Slip. How the Crash of '08 Upended Your World. 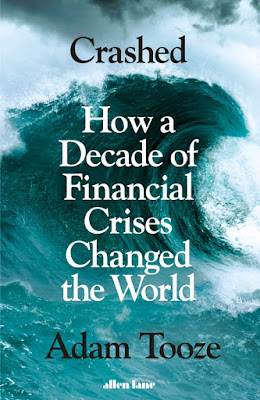 If economist Yanis Varoufakis thinks it's important, chances are good it's important. Which is why I decided to post on a book review Varoufakis wrote for The Guardian last week. The book, "Crashed, How a Decade of Financial Crises Changed the World," sounds like a must-read. Varoufakis observes with a chilling insight into what awaits:

Every so often, humanity manages genuinely to surprise itself. Events to which we had previously assigned zero probability push us into what the ancient Greeks referred to as aporia: intense bafflement urgently demanding a new model of the world we live in. The financial crash of 2008 was such a moment. Suddenly the world ceased to make sense in terms of what, a few weeks before, passed as conventional wisdom – even McDonald’s, for goodness sake, could not secure an overdraft from Bank of America!

...Crashed: How a Decade of Financial Crisis Changed the World combines simple explanations of complex financial concepts with a majestic narrative tracing the prehistory and destructive path of the crisis across the planet (including long, apt and erudite chapters on Russia, the former Soviet satellites, China and south-east Asia). It also offers original insights into the nature of the wounded beast (financialised capitalism). Of the myriad unacknowledged truths that Tooze illuminates, some examples follow.

Many economies (Ireland and South Korea for example) that were run according to what the global establishment considered “best practice” (government and trade surpluses, light regulation of banks and employers) crashed the moment 90% of global money flows dried up. Why? Because the establishment’s prescription had skilfully left out the crucial truth that the main threat came from the banking system (not the state) and from private (not public) debt. ...Meanwhile, American and European politicians, who had grown used to a cosy relationship with the bankers, converted a crisis of (super-rich) creditors into one of (poor and middle-class) debtors, pushing the losses of the former on to the latter – also known as socialism for bankers and austerity for the many.

...Back in 1967, John Kenneth Galbraith described how capitalism had shifted from a market society to a hierarchical system owned by a cartel of corporations: the technostructure, as he called it. Run by a global elite that usurped markets, fixed prices and controlled demand, the technostructure replaced the New Deal’s full employment objective with that of GDP growth. Though Tooze does not mention Galbraith directly, he implores us to grasp how Galbraith’s technostructure extended, post-Bretton Woods, its realm by adding the black magic of financialisation to its structure (through, for example, turning car companies like General Motors into large speculative financial corporations that also made some cars!), magnifying by a dizzying factor its power and, ultimately, replacing the aim of GDP growth with that of “financial resilience”: enduring paper asset inflation for the few and permanent austerity for the many.

...In the end, the financialised technostructure was saved by two governments (America and China), while the neoliberal populist myth (that wholesale deregulation will make everyone’s dreams come true under the rule of democracy) is now dead. Is it any wonder that racism and geopolitical tensions are all the rage? Was it not inevitable, as some of us have been warning since before 2008, that a “nationalist international” would soon gain power, on the back of an explicitly xenophobic narrative – in the White House, in Italy, Austria, Poland, Hungary, the Netherlands, and shortly in Germany (once Angela Merkel is shoved aside)?

[The author] worries that, in this putrid political environment, the US and Chinese governments will never again be able to pull off a similar trick. To this I would add that the fantasy of apolitical macroeconomic management, promoted energetically by the technostructure, is the other side of the undeclared class war with which the establishment has been shifting all the risks and all the losses on to the weak, instructing them to “suffer what they must” – pushing them, in the absence of a progressive internationalist alternative, into the arms of a postmodern fascism. In his conclusion, Tooze draws a parallel between our present aporia and 1914, when an earlier illusion of some “great moderation” was shattered. On this I beg to differ. From where I stand, we are at a 1930 point – soon after the crash, and with a fascist moment upon us. If so, the pressing question is this: when will we rise up against the nationalist international bred across the west by the technostructure’s inane handling of its inevitable crisis?

What makes today feel even more like 1930 is that dealing with thugs like Trump etc. is either Neville Chamberlains " peace in our time" or becoming like Winston Churchill. There no longer seems like there is a middle ground any more.

Really? I could swear it's alive and well in the eyes of Trump and Ford supporters.

I was in South Korea while this happened. You are correct that S. Korea lost a lot of money in reserves through no fault of their own. They have not really recovered from it. I've ordered the book. Anyong

.. it all leaves me bewildered Mound.. I look at my simplistic analogies and wonder if they can be true (they are very dark, and I try to keep them concise) I see an America with military in approx 72 foreign countries - and no sporting or political event can commence or unfold without giant flags, military flyovers, pomp (no kneeling!) and ceremony. And don't spare the religious under & over tones !

China and Russia are distant lands.. controlled politically by 'leadership' that is.. uh .. 'unusual' to me, certainly. But these are the two main players as far as 'real military capability' .. plus the USA of course. China of course is beset by drought, failing aquifers & water table, astonishing population. Russia seems to run along the razor's edge of disaster & is well practiced at 'taking one for the team' on a daily, monthly, annual and lifetime basis.. the smaller countries adjoing them (OK, India is not 'small) are also in the throes of drought, over population, & the factional strife where 'religion' & mythology & culture are mixed with governance and guns

The USA seems to be on a diet of Prozac, marijuana, Kocaine, crack, meth money and guns.. They still have water.. and are fracking and thrashing the land for natural gas & petroleum.. and their offshore areas as well.. Rhey are not really worried about water, no doubt figuring they will just steal it or take it from Canada eh

Your excellent article suggests there are other 'world powers' out there.. whether in boardrooms, country clubs, aboard super mega yachts etc.. who are also working the systems & even the courts etc.. to make deals or set the table for their scams, grifts, thefts and stock their offshore and inshore back accounts, portfolios & holdings. For all I know, the Koch Brothers may just be the minor league.. and must grub for their profits & dreams of 'power' - meanwhile, mainstream North American media is become narcoticized by the consolidation of media ownership under just a few 'flags' that seemingly have no real physical borders.. just money, power & personal opinions

The Modern and Fashionable Karachi call girls are Available for the individuals who need a sidekick and Pleasure We present to you a portion of the best Models buddies Escorts in Islamabad who are Professional as well as all around.  Pakistan Best Islamabad Escorts Agency Offer The Most High Profiles Well Educated Good Looking and Full Cooperative VIP Model Services they are Independent and Provide Very Comfortable Service Cheap and Excellent service.

Experts and patriots are enraged:

The crazies secretly maneuvered more wealth into their pockets

In the last year, than they did in the last 185 years!

No living soul can spend that much money in a lifetime…

And when people sits on money,

And that’s how it all begins:

What’s coming in the next 6 months or less

Will give a new definition to the infamous “economic crisis”

Are you prepared to be broke…

Or can you turn the game around: