UN Official - We Have to Reset Politics While There's Still Time 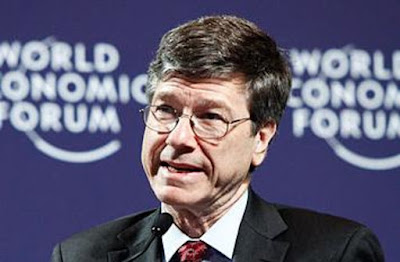 Jeffrey Sachs doesn't mince words when he writes, "We are all climate refugees now."  The director of Columbia's Center for Sustainable Development and the UN Sustainable Development Solutions Network, says government is the problem. It's also the fix, the only fix, if only we will change it. If we don't, if we perpetuate this dereliction/betrayal it will not go well for us.


How utterly reckless of humanity to have rushed past the Holocene boundary, ignoring – like a character in a horror movie – all of the obvious warning signs. In 1972, the world’s governments assembled in Stockholm to address the growing environmental threats. In the lead-up to the conference, the Club of Rome published The Limits to Growth, which first introduced the idea of a “sustainable” growth trajectory and the risks of environmental overshooting. Twenty years later, the warning signs flashed brightly in Rio de Janeiro, where United Nations member states assembled at the Earth Summit to adopt the concept of “sustainable development” and to sign three major environmental treaties to halt human-induced global warming, protect biological diversity, and stop land degradation and desertification.

After 1992, the United States, the world’s most powerful country, ostentatiously ignored the three new treaties, signaling to other countries that they could slacken their efforts as well. The US Senate ratified the climate and desertification treaties but did nothing to implement them. And it refused even to ratify the treaty to protect biological diversity, in part because western-state Republicans insisted that landowners have the right to do what they want with their property without international meddling.


What's the problem? Government. Not just America's, our own.


The main reason is that our political institutions and giant corporations willfully ignore the rising dangers and damage. Politics is about obtaining and holding power and the perks of office, not about solving problems, even life-and-death environmental problems. Managing a major company is about maximising shareholder value, not about telling the truth or avoiding great harm to the planet. Profit-seeking investors own the major media, or at least influence it through their advertising purchases. Thus, a small yet very powerful group maintains the fossil-fuel-based energy system at growing peril to the rest of humanity today and in the future.


The solution? A new politics, radically different from what we've endured from the Liberals and Conservatives. It's our last, best chance.


We need a new kind of politics that starts with a clear global goal: environmental safety for the planet’s people, by fulfilling the Paris climate agreement, protecting biodiversity, and cutting pollution, which kills millions each year. The new politics will listen to scientific and technological experts, not self-interested business leaders and narcissistic politicians. Climatologists enable us to gauge the rising dangers. Engineers inform us how to make the rapid transition, by 2050, to zero-carbon energy. Ecologists and agronomists show us how to grow more and better crops on less land while ending deforestation and restoring previously degraded land.

Such a politics is possible. In fact, the public yearns for it. A large majority of the American people, for example, want to fight global warming, stay in the Paris climate agreement, and embrace renewable energy. Yet, as long as a narrow and ignorant elite condemn Americans and the rest of humanity to wander aimlessly in the political desert, the more likely it is that we will all end up in a wasteland from which there will be no escape.

Our kids' and grandkids' survival is at stake. Environmental safety for the planet's people should be Justin Trudeau's overarching priority but it's not. Yes Andrew Scheer, Doug Ford, Rachel Notley and Jason Kenney are a good measure worse but that's not the point. It's Trudeau's job to serve Canada, not to let it fail just because the worst will befall us on someone else's watch.

Green your commute.
Use energy wisely - save money, too!
Help put a price on pollution.
Consume less, waste less, enjoy life more.
Divest from fossil fuels.
Invest in renewables.
Eat for a climate-stable planet.
VOTE!
Tell your story, listen to others. Anyong

What pisses me off is all I hear is "We have to grow the GDP" ... "We have to grow the economy" ... "Labour shortage" blah blah blah. Do our leaders think the planet's resources are infinite or just don't care? And on that note I remember 20 years ago the left was always talking about overpopulation and now not a peep. Is it politically incorrect to talk about Africa's exploding population?

All good points, Anyong. However this post is about demanding sweeping change in how we're governed.


Anon, it's only been the past month or two but, finally, there is change afoot among the climate change community to recognize the greater threat that is the combination of climate change, overpopulation and over-consumption. This enlightenment is great but it's difficult to see how that will make its way into our political orthodoxy.

Then how about this: There isn't one government worth their salt in this country to stand up and say what needs to happen in order to save our planet period. Anyong


Anyong, I don't know how to get this across to you.

You write, "There isn't one government worth their salt in this country to stand up and say what needs to happen in order to save our planet period."

Can't you see that's the point of this essay? It's about the need for an abrupt change in our governance.

Such a politics may be possible. But, as H.G. Wells wrote, it's going to be a race between education and catastrophe.

Yes Mound that is the point of your blog and why I wrote what I wrote. Anyong.

All of those laws were created through the judicial system- that you are a part of, sir – but they were actually designed by influential people behind the scenes that would profit from them.
As much as we think we have come a long way, the mentality behind the Industrialists, the Plantation owners, the European lust for Indigenous land, and the men that wanted their wives to do their bidding, is still very present in our society.
Our judicial system is still being manipulated by rich and powerful people that have the influence to make our legal system work for them.
I truly believe that when we have laws that support injustices, it is the duty of all good men and women to stand up and challenge those laws.
A prominent and recent case in point would be when Director Chatenay of the Canadian Wheat Board was jailed for protesting the Canada Customs Act and its restrictions on
Anyong

grain exports. In his own defence, Mr. Chatenay stated that, “The greatest respect for the law is to change an unjust one.”
Subsequently, on August 10th of 2012, Mr. Chatenay, and others jailed for that protest, were pardoned by then – Prime Minister Harper who, in doing so said, and I quote,
“These people are not criminals. They are our fellow citizens who protested injustice by submitting themselves peacefully to the consequences of challenging injustice.”
I believe the man I just quoted is the person who appointed you to the position you hold today.
This law sir, that you have created, and that I, and many others are peacefully challenging, is unjust.
It supports an industry that is not just harming children, or black people, or women, or Indigenous peoples. Your law, in fact, is supporting an industry that has been scientifically proven to be harming the whole world and every living thing on it.
Today I feel privileged and proud to be standing on my side of the bench before me.”
Anyong.....

The Law needs to change don't you think? Anyong