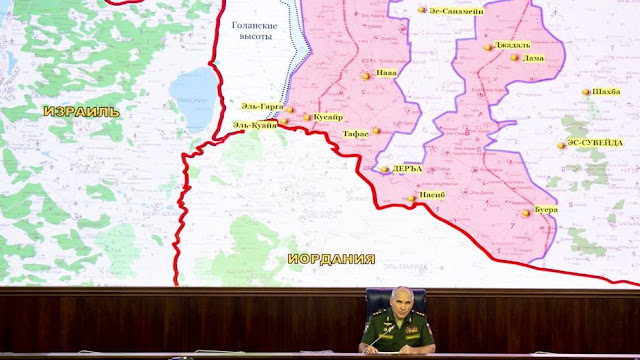 Israel will soon square off against Russian forces deployed along its frontier in the occupied Golan Heights.

Russia says the troops will be military police. Right.


Sergei Rudskoi, a senior Russian defense ministry official, said that Russian military police had on Thursday begun patrolling in the Golan Heights and planned to set up eight observation posts in the area.

He said the Russian presence there was in support of United Nations peacekeepers on the Golan Heights who, he said, had suspended their activities in the area in 2012 because their safety was endangered.

“With the aim of preventing possible provocations against UN posts along the ‘Bravo’ line, the deployment is planned of eight observation posts of Russia’s armed forces’ military police,” Rudskoi said.

It's a brokered deal between Assad, Iran, Russia and Bibi.

allowing Assad to deconflict them out,

Russia keep Hezboallah and Iran out of the area and provides security.

Jay, nothing - not even the most concrete pact - lasts for long in the ME. It's a land of wheels spinning within wheels, often tolerating some compromise or even withdrawal in exchange for some concession.

Things evolve there that are very short-term, if not immediate, that drag on for the entire lifespan of some Gazans. They've been held captive for more than half a century. Their living conditions inside this gulag have degraded to the point that just living inside the Gaza compound is a threat to life.

Trump, in the meantime, is working overtime to find new ways to screw up the Gulf States and the Greater ME including Syria and Iran. Nothing here is as one-dimensional as current conditions suggest.

This is a work in progress, a "new war" that finally incorporates civil rivalry to compliment armed insurrection to the point that the outcome in one challenge might not necessarily decide the second.

Give it a couple of years, four maybe, and there's a solid chance we will be of a different mind, a different inclination to our predicament - globally and locally,

But this is a "brokered" deal between the 4 major players cutting the US out.

Read an interesting article today on "borderization" in Georgia.

Every night, Little Green Men creep out and move the barbed wire and signs 100 metres further into Georgia from South Ossettia and Abakazia.

Russia even allows the North Koreans into its country to work. Russia will do anything to disrupt other countries while its own country lives in poverty. That picture is awful. Anyong