Just For the Record. Vanishing Arctic Ice and India's Monsoon 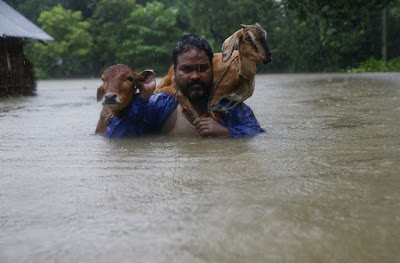 India is currently enduring the worst Monsoon flooding in at least a century. It doesn't sound that uncommon. Every part of the world is now hit by global weirding of one form or another - massive flooding, flash floods, mega-droughts, flash droughts, cyclonic storms (hurricanes, tornadoes), abnormal heatwaves, abnormal cold snaps and, for many, a combination of two or more of these unwelcome shifts.

It's therefore timely that an India's National Centre for Antarctic and Ocean Research, Goa,  has released a report linking the loss of Arctic sea ice to that country's worsening Monsoon flooding.

Besides sea level rise, the NCAOR has also found that warming at the poles and glacier melting is affecting India’s weather patterns, in particular, the South West Monsoon.

An earlier study by the NCAOR have found a direct physical link between the warming climate and the monsoon. The increased melting of Arctic glaciers affected the difference between land and sea temperature, resulting in higher intensity of the monsoon rain.

Another day, another report.

India, of course, is an environmental mess. It's overpopulated. Too many of its people lack adequate water for drinking, cooking and sanitation. Its groundwater resources are fast depleting and it faces a return of food insecurity. Its major cities are also sinking just as sea level rise speeds up.

Between the top five metros—Mumbai, Delhi, Kolkata, Chennai and Bengaluru—the population is a whopping 37.8 crore and climbing; India is an urban disaster in the making. Forty million Indians are likely to be affected by rising sea levels as global warming drives temperatures up, causing ice sheets to melt. India is not saving up for a rainy day. Waterlogged roads, flood-related deaths and crippled infrastructure, urban displacement and economic loss make wearingly repetitive news every time it rains.

It is an interesting report that details conditions in India's major cities and projections of what they will face in decades ahead.

What is becoming apparent - in India as in pretty much every other country - is that our national governments are not remotely up to the challenges that will confront us, our children and grandkids. They're not really even trying. At least that is partly understandable. They're broke, they didn't see it coming, yada, yada, yada. What is not understandable is why, when they know the severity of these threats and their impotence to meet these challenges, they still persist in economic policies that will make a scary future almost certainly unbearable.
Posted by The Mound of Sound at 8:48 AM

Now there is a great problem. Millions will die. Anyong


More like five to six billion before this century is out, Anyong.