FUBAR - All Around the World 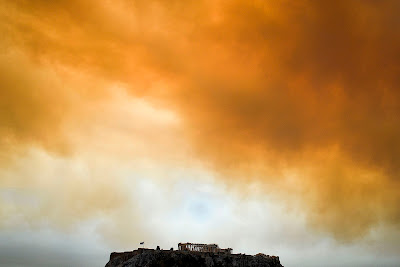 The photo is the sky above the Parthenon last week from wildfires sweeping Greece.

I spent an hour this morning reading a succession of crazy, extreme weather reports from Australia to Asia, Europe and, of course, North America.

It's 83 today in Honolulu but the state has issued a winter weather advisory for the higher parts of the Kona area of the Big Island. Yeah, that's right. Hawaii, August, winter weather advisory.  Apparently lava flowing into the ocean from the Kilauea volcano is forming steam that's being swept back inland creating icy road conditions, even snow, at higher altitudes. Meanwhile Hurricane Hector is moving in the direction of the Hawaiian islands.

While much of Europe, especially Portugal and Spain, are in inferno-mode, the Brits are bracing for a week of heat expected to reach 36C that will be followed by torrential rains and flooding by Friday.

European wheat and cereal grain producers are facing sharp declines in crop yields. This includes Europe's second major wheat producer, Germany. Russia is on track for a normal crop but the quality of the wheat has been significantly degraded.

Australia is reeling from extreme drought, particularly across the states of Queensland and New South Wales.

In Asia, both Koreas have been sweltering in 40C temperatures. This has been the summer from hell for Japan that has experienced massive flooding including killer flash floods followed almost immediately by a sustained heatwave. Crowded Tokyo was at 37C on Thursday.

Along California's southern coast, the Pacific waters have reached a balmy 80F. In summer the normal temperature is 68F.


The once-in-a-lifetime, tropical weather is sending hordes to the shores, but they're also changing the very nature of classic Southern California beach weather, long influenced by cool breezes and waters chilled by the north-to-south California Current. The NWS recently measured a dew point in San Diego of 70, which indicates an environment that feels positively sticky.

"It's over the top," says NWS meteorologist Alex Tardy. "It’s making the nights warmer, the days muggier and the sea breeze doesn't work as well as it usually does."

In northern California, firefighters are bracing for windy, hot weather that could spread the already immensely destructive wildfires.

On the other side of the US, authorities are dealing with heavy flooding.  The people of Lynchburg, Virginia got a wake up call as flood waters overwhelmed a nearby dam, creating the risk of a collapse. Authorities said, if the dam failed, it could raise water levels in the already flooded city by 17 feet in less than 10 minutes. This forced a mass evacuation of the city's downtown core. Waters have now receded.

All doom and gloom with you eh Moundy?


Well, I suppose I could ignore it - pretty much the same way our government is reacting to it. These changes are huge and they're spreading. Five years, ten years from now we may be dealing with something far worse.

No secret that I want Canada to transition out of fossil fuels as quickly as possible. Yet out government's path is diametrically opposite to that. It now owns the TransMountain pipeline and continues to lavish billions in subsidies and far more in deferrals, grants and natural capital on the fossil fuel giants.

Trust me, this isn't "doom and gloom." That is still to come but it might not be that distant.

Awww..."so pretty" someone said to me. Don't they have any idea? Nope!