One Juror Took Manafort Off the Hook for Ten Felonies 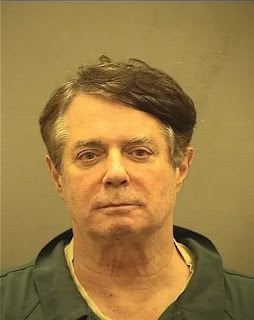 One intransigent juror is all that stood between Paul Manafort and conviction on all 18 felony counts at trial.

“There was one holdout,” the juror in the trial, Paula Duncan, said in an interview. We all tried to convince her to look at the paper trail. We laid it out in front of her again and again and she still said that she had a reasonable doubt.”

The jury on Tuesday found Manafort guilty on two counts of bank fraud, five counts of tax fraud and one charge of failing to disclose foreign bank accounts, giving special counsel Robert Mueller a victory in the first trial arising from his investigation of Russia’s role in the 2016 US election.

Didn't Manafort get his bail revoked for attempted witness tampering? I wonder if someone with an eastern European accent got to the juror.

Two Gullibillies were in the Jury. 1, despite her love of The Insane Clown POSus was convinced Manifort was guilty of all crimes. The other was dumb as a post.

Interesting. The news simply underscores the strength of the prosecution's case -- and it should cause Manafort to think long and hard about what awaits him in D.C.

Because the Judge and Jury ruled a mistrial on 10 of the counts, the SDNY has until August 29th to refile charges on those 10 counts.

- spend the rest of his life in jail, with some occasional trips to court,

- roll on the Russians and the Insane Clown POSus and enter WitSec.

In the end run the USA have no morals, oly faith.

I don't know, Jay. If the second MAGAt was dumb as a post, wouldn't they acquit on all counts?

Now let's say you were an guy who was owed $20m by Manafort. At trial, Manafort did his job, refused to cooperate and kept his trap shut. So you want to reward him.

At the same time, you know he has a second trial coming up. If you do nothing and he goes to jail for life, he loses the incentive to shut up in the second trial and you ain't never getting paid back. If you arrange a hung jury on all charges, then Manafort can't be sure you had a hand in helping him - it could just have been a dumb MAGAt. Worse, the media will want to speak to him and he'll be back at home.

Your ideally want to punish Manafort and let him know you can help as well. You want him in jail between trials, facing a few years in stir but not a lifetime. You want to let him know that things could've been worse if you hadn't intervened, and if he continues to cooperate with you, you'll cooperate with him. Conviction on some counts and a hung jury on the majority sends that message. You also know if your juror did as told.

Deripaska's never getting his money back.

Manifort was "blown" the moment Yanukovich fled to Russia.

Manifort spent two years trying desperately to come up with another Cash Cow, but between his sleaze and the Russian's lack of friends,

His only "Hail Mary" was to join his old friend The Donald's campaign, work for free, and coordinate treason with the Russians at the highest levels of the ReThug's, to "pay" off his debts,

But he still had bills to pay, so he did some side criming.

Now Manifort's completely blown. He's only useful to Meuller and the dozens of other investigations starting to pop up.

Jurour A say's that no matter who tried to explain it to him, Jurour B couldn't grasp the legal concept or definition of "reasonable doubt". The guy only grasped 100% guilty or 100% innocent, with no grey area in between. Not an uncommon conservative mindset.

I wonder what the jurour was promised? Anyong