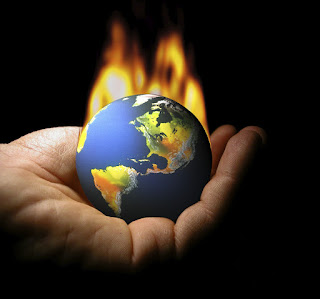 The Achilles Heel of Canada's and other governments' climate change plans is that they're working with political numbers, a failure that guarantees gestural responses at best.

Trudeau can read. He can hear. He was a school marm after all. He knows the deal is that we have to start making significant reductions in carbon emissions every year, without fail.

Trudeau, like Harper before him, is looking to provincial and municipal governments to do the heavy lifting while his contribution is largely lofty rhetoric - hot air. And Trudeau's idea of slashing carbon emissions is to ship diluted bitumen offshore where the emissions associated with the world's filthiest, highest carbon ersatz petroleum can be buried on some other country's books.

They keep talking, promising a better day to come, and the emissions keep rising. Oh, somebody will fix it, some day, surely.

We're not going to fix anything with political numbers and gestural responses. Even the targets these elected charlatans say they hope to meet, maybe, are not going to prevent civilization-destroying runaway global warming. A new report, from the best minds in the field, finds that their 2 degree Celsius target will still trigger several "tipping points." In other words our leaders are waking Mother Nature and natural feedback loops that will eclipse man-made or anthropogenic carbon emissions.


The world is at risk of entering "hothouse" conditions with average temperatures 4-5 C higher even if emissions reduction targets under a global climate deal are met, scientists say in a new study.

The report, published Monday in the Proceedings of the National Academy of Sciences, comes amid a heatwave that has pushed temperatures above 40 C in Europe this summer, causing drought and strengthening wildfires, including blazes in Greece in July that killed 91 people. It is suspected that the Greek blazes resulted from arson.

...Scientists from the Stockholm Resilience Centre, the University of Copenhagen, Australian National University and the Potsdam Institute for Climate Impact Research said it is likely that if a critical threshold is crossed, several tipping points would lead to abrupt change.

Such processes include permafrost thaw; the loss of methane hydrates from the ocean floor; weaker land and ocean carbon sinks; the loss of Arctic summer sea ice and the reduction of Antarctic sea ice and polar ice sheets.

"These tipping elements can potentially act like a row of dominoes. Once one is pushed over, it pushes Earth towards another," said Johan Rockström​, co-author of the report published in the Proceedings of the National Academy of Sciences and executive director of the Stockholm Resilience Centre.

"It may be very difficult or impossible to stop the whole row of dominoes from tumbling over. Places on Earth will become uninhabitable if 'Hothouse Earth' becomes the reality," he said.

In my view, the offshoring of diluted bitumen is a crime against humanity. The Petro-Pimps of Parliament Hill, from the prime minister to the backbenchers and on both sides of the aisle are complicit.

Global heating and climate change are already killing people. We're losing scores from heatwaves but the real carnage is among the most vulnerable people of the poorest nations. They're already taking it in the neck.

There's no going back. Our government, in collaboration with the Fossil Fuelers, is making the future worse, not better. They're writing off our grandkids' future for a short-term windfall that, history shows repeatedly, they simply piss away.

I read the article earlier today, Mound. The evidence is clear: western governments are serving someone's interests, but clearly not those of average citizens, who will be left to fend for themselves when the cascades of climate change feedback loops become unstoppable.

I am reading 'Oil's Deep State" by Kevin Taft. Pretty much lays it all out. I am sure you have read it.


I've heard of it, Helen, but it's not been added to my ever expanding pile of books awaiting reading. Eventually, hopefully.


Lorne, I keep wondering why this is being allowed to happen? Can they truly not see beyond the next electoral cycle? If the steadily worsening warnings they've been getting, especially over the last 20 years, haven't motivated them to take meaningful action, is there anything that would move them at this point?

I do believe what we're doing is a crime against humanity.

.. aspirational propaganda ..
That's the term for what Canadians get from Trudeau, Ms Notely, John Horgan & other political grifters like Jason Kenney et al. You must be sick of hear the names & nonsense. Right now, some 300,000 barrels of various crude petroleum come to west coast ports via Trans Mountain. Of that, Afromax supertankers of Dilbit (550,000 barrels) went off to Asia.. the other 46 went to Washington State and California for refining. A twinned pipeline with likely follow that ratio of Dilbit to Asia. But the number of supertanker 'transits' ie the in and out trips through the Salish Sea etc will multiply greatly. Can someone explain why we need to load supertankers to move Dilbit to Washington State? Last I looked you can see it from Grouse Mountain in Vancouver. The wet dream of untold wealth, jobs jobs jobs, energy security for Canadians, nation building, pay for lowering greehouse gas emissions.. is just 'aspiratinal propaganda ? The proverbial rainbow unicorn that Christy Clark fed Canadians ? All to move Dilbit a few nautical miles, from our territorial waters into Washington State territorial waters ? The consequences of this.. where first we subsidize the foreign owned pipeline entity.. the we buy it from them (we is Canadian taxpayers) and the 'we' pay to build the twin.. to get more of it to Washington State & California ? At what remedial cost, down the road, Justin ? So the buffalo can roam..

"Can someone explain why we need to load supertankers to move Dilbit to Washington State?"

Me sitting here in halifax has known this throughout the entire saga. It was as simple as going to the Kinder Morgan web page.

Meanwhile, sitting in a climate-changed Nova Scotia where temps have exceeded 25C for over two weeks (today 32 with 79% humidity for a 42 humidex, 35C at CFB Greenwood in the valley), I really feel it's time for the idiotic Notley and climate change denier Albertans to come here for a TROPICAL vacation and crack open a few coconuts for a refreshing libation. A special invitation for Kenney to come here, place himself on a spit down on the Halifax waterfront and sweat off some porcine pounds while uttering smarmy gibberish for the assembled Proud Boys on leave from CFB Halifax.

We are beamed daily a Government of Alberta TV ad on all networks, yes indeed we are, that eulogizes the TMP and how it will enable Canada to sell more oil at a higher price so that gleaming new hospitals and public works can be built! I am not kidding. It's Orwellian. Thankyou, NDP and all the other oligarchic idiots and fellow traveller pols calling the shots in this ruined country. Let's arrest some more 70 year old protesters in Burnaby and throw them in jail to really show who's the boss.

it's so fucking sad, it makes you want to scream with frustration.

Tourism, forestry, logging, agriculture, trucking, mining - that's BC's economy. They all run on fossil fuel. The plan is to reduce fossil fuels and somehow grow our economy at the same time.


Yer just a Cassandra in a coal mine .. alas

Yes Mound, it is a crime against humanity. Anyong