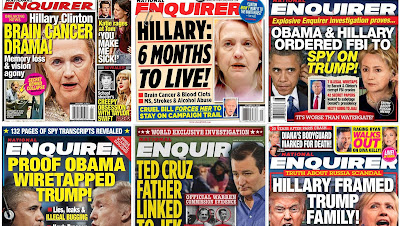 During the runup to the 2016 presidential election, the National Enquirer went on a full court press to malign Hillary Clinton and tout for Donald Trump.

But what if this isn't a matter of freedom of speech? What if the National Enquirer was a de facto public relations organ of the Trump campaign, its CEO, David Pecker, coordinating the Enquirer's coverage with the campaign and, by some accounts, Trump himself? One source claims that Trump actually chose which stories would appear on the Enquirer cover.

In that case, all those Enquirer editions could be seen as a massive, undisclosed and probably illegal campaign contribution.

I don't pay attention to the Enquirer or other tabloids that you see at grocery store checkouts but Rachel Maddow showed several Enquirer covers from the pre-election period and they were remarkable to say the least. Bizarre.

Trump's always demanding evidence of "collusion." I think the Equirer business qualifies and it goes to campaign finance law violations, tax law violations, who knows what else?

And now AMI or whatever the parent corp of the Enquirer is called is starting to release people from the NDAs they signed to kill anti-Trump stories ie. the Trump Tower doorman with the story about Trumps child with hotel staff. This is going to get more and more entertaining.


I'm getting the idea there's a goldmine of skulduggery inside the National Enquirer, Willy.

It appears that The Enquirer also buried all kinds of unflattering stuff about Trump.

Omarosa revealed in last week's Infrastructure Week that Faux News was doing the same thing in direct connection with the Campaign, along with push polling and message shaping.

AMI's gonna be toast when the liabilities start to pile up.

Nazi Tears are so delicious.

So, what, it's only OK when Fox or MSNBC do it?

It would seem odd to make too much of a fuss over the right to free speech of a party that purchases stories for the purpose of suppressing them. But I suppose both instances involve rights that the Enquirer didn't sign away and warrant being defended.